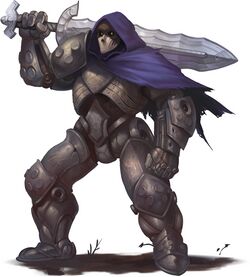 Inevitables are a family of living machine aeons created by axiomites in the eternal war against proteans and the forces of chaos.[1]

Most inevitables resemble humanoids made of stone, metal, and jewels. They are forged by axiomites and often look like moving works of art. They are aware of how they inspire awe, and usually choose to speak in a steely, booming voice to ensure obedience.[2]

In ages past during Axis's expansion, its inhabitants entered into agreements with Heaven and Hell that solidified its multiversal neutrality between the two moral extremes of good and evil. Immediately opposing this were two keketar proteans and a third, unknown albino type of protean, who called Axis an "infection" and demanded that it cease to exist.[3]

Although Axis prepared for war, the cataclysm that happened in its stead devastated the city. Planar rifts tinted blue like the Maelstrom's depths rent Axis' walls and spilled hordes of demons into the city of cities, causing widespread destruction. In response, Axis devoted some of its axiomites to crafting a defensive force, which led to the first inevitables.[3]

A council of pleroma aeons recently revealed that axiomites were prodigal aeons that broke free from the Monad, an aeon demigod that claims to represent the underpinning of all realities, in order to pursue acts of creation. By extension, the council claimed that inevitables had always been agents of aeons in their eternal war against imbalance. Most, but not all, axiomites and inevitables have joined forces with aeons as a result.[1]

Inevitables are created for the purpose of enforcing the laws of reality and society. Each inevitable's existence is driven by a conceptual jurisdiction to be enforced. They have no ambition and cannot be swayed by bribery, but are sometimes willing to offer light sentences in exchange for aid against greater crimes. They have no gender and little sense of self.[2]

Although they look like constructs, inevitables are living outsiders that nonetheless enjoy many benefits of a constructed form: they are never tired, hungry, nor sick.[2]

Inevitables can become corrupted as the result of chaos suffusion or possession by pelagastrs, becoming chaotic creatures known as unshackled.[6]

Inevitables are almost always encountered singly on the Material Plane except when gathered into a force by the commands of their creators. When operating alone, they attempt to correct mortals' chaotic ways and use various methods to push them into making amends. In extreme cases, inevitables back this up with force—even lethal force. Some inevitables regularly return to Axis to receive new orders, while others are ordered to operate at their own discretion across a large territory.[2]

Some inevitables remain on Axis, where legions of inevitables regularly battle against the Maelstrom in an eternal attempt to bring order to the chaotic realm; these inevitables are termed the Bulwark. Others, called Seekers, analyse axiomites' observations and dispatches about the mortal world. Between assignments, they establish homes in Axis or wander the planes to pursue a broader mandate.[2][7]

Inevitables are guided by an unspoken hierarchy: the more powerful an inevitable, the higher its rank. When two cross paths, they also take into account the immediacy and severity of each one's mission to determine primacy; if necessary, a powerful inevitable might defer to a lesser one. Inevitables never clash with each other. Axiomites exist outside this hierarchy, and inevitables respect and are absolutely loyal to their creators, although the two races operate more as partners instead of master and servant.[2]

Inevitables have little culture or desire to make friends, and their relationships are strictly professional. They often rely on local mortals (like local authorities, adventurers, or followers of lawful deities), unless these mortals are part of the problem or informing them could ruin the mission. Inevitables rarely compel service and might even pay those who lie outside the hierarchy of Axis.[2]

Outside of axiomites, aphorites and certain deities' servants, most outsiders do not work well with inevitables. Angels and agathions are put off by their stoic, strict adherence to the letter of the law, while psychopomps find their zeal and interference upsetting. Archons and devils are willing to work with them but disagree with how inevitables exact punishment. On missions that demand speed, inevitables often ride on mighty aekrakarshis.[2]

Inevitables regularly teach mortals how best to honour order, but know that mortals are imperfect, and aim to improve behaviour or magically compel it, trusting that their students will never meet their standards.[2]