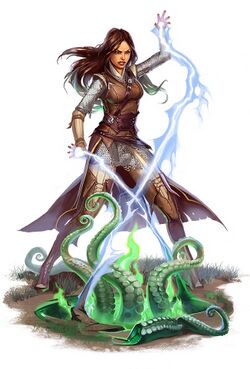 Not all inhabitants of other planes welcome tourists.

Planar travel occurs when creatures or objects move from one plane to another. There are multiple methods of planar travel, and each depends on the nature, properties, and connections between certain planes.[1]

Planes might intersect at specific coordinates of each plane's physical dimensions, making them coterminous with one another. Planar travel between the intersecting planes is possible at these points. One example in the Great Beyond is the intersection of the Material Plane and Plane of Air.[1]

Planes that are coterminous at every point, resulting in a total overlap between one another, are considered to be coexistent planes. The Ethereal and Shadow planes, for example, are coexistent with the Material Plane.[1]

Most travel between planes that do not overlap or are directly connected to each other is accomplished by using transitive planes, such as the Ethereal and Astral planes, which overlap with or connect to both the home and destination planes. Magic spells capable of astral travel or teleportation, such as plane shift and gate, can accomplish this.[1] 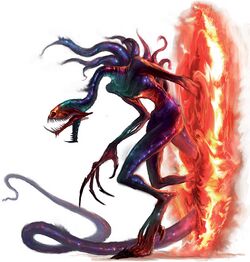 An astradaemon emerges from a portal.

Whether from natural phenomena or magical intervention, portals can open direct point-to-point routes between multiple planes.[2]

For additional protection while traveling between planes, a planar vehicle can offer additional defenses and predictability compared to portals or magical travel.[3]

For creatures who call the diverse Material Plane home, planning for planar travel is counter-intuitively simple relative to a trip on or between its planets: the properties of the destination plane are strong and knowable in advance, as opposed to the often wildly varying and dynamic traits that can be experienced within regions of a single Material Plane world, much less its many physical phenomena.

Elemental planes are strongly associated with one element at the exclusion of others, for example—travelers do not need to pack cold-weather clothing for a trip to the Plane of Fire, and goodly creatures know they have less to fear in Heaven than Hell (and vice versa for evil beings, and something of concern in both lawful planes for chaotic creatures).[4]

Prominent planes include at least one sanctuary area that can safely accommodate planar travelers, which are called planar hubs. These hubs are populous cities that act as capitals of their realms.[5]