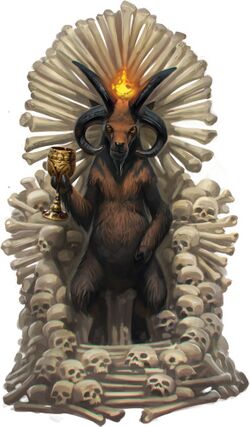 An awakened goat sits on The Shepherd.

The Shepherd is a diabolical manifestation of Barbatos in the form of a throne of bones. Placing an animal on the throne awakens it, turning it into a lawful, evil servant of Barbatos that can speak Common and Infernal languages and gives powerful speeches.[1]

The throne can awaken a single animal per day for 24 hours, and an animal awakened by the throne often returns to it to renew the effect.[1]

To destroy the throne permanently, one must remove the bones of the cleric of Barbatos from the throne, bless them, and bury them in holy ground.[1]