The Al-Zabriti are a collective of traditional Keleshite tribes living in the Al-Zabrit region of Qadira's Meraz Desert. They are Althameri tribes and thus related to the rulers of the Empire of Kelesh, but have eschewed the settled urban lifestyle to follow their people's ancient nomadic traditions. Their genie-blessed horses are renowned far beyond their borders, but they are an insular and secretive people.[1][2]

Families of the Al-Zabriti trace their roots to the Althameri tribes that founded the Empire of Kelesh.[1] While most Althameri stayed and grew powerful in central Kelesh, the Al-Zabriti's ancestors married into seminomadic local tribes of what would later become Qadira.[3]

The Al-Zabriti are comprised of tribal, matrilineal families. Members are strictly prohibited from injuring or killing each other.[1]

The signature fighting style of the Al-Zabriti is embodied by asavirs, leaders of the tribes' defenders, who have close relationships with horses from the tribe's genie-blessed stocks. They are famously adept at building loyal and coordinated teams of combatants and using their mounted prowess to break enemy lines and challenge their leaders.[4] 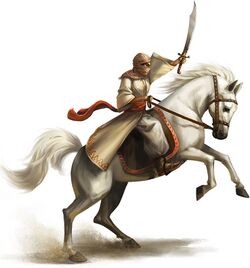 Qadiran horselords are fleet and indefatigable mounted combatants whose traditions originated with the Al-Zabriti, but are now known across the Inner Sea region. The term "horselord" was applied by outsiders.[5]

Sunriders are desert survivalists and druidic cavalry of the Al-Zabriti, and rarely leave their tribal homes in Al-Zabrit except when necessary—or if they are exiled.[6]

Holds of the Al-Zabriti are controlled and inhabited by individual families, their extended relations, and clients who receive protection in return for working to maintain the self-sufficient oasis settlements. Each hold has its own farms, defenses, and housing.[3]

Surrounding each hold are stone pillars at one-mile intervals that reach 50 feet skyward and bear the flags of the hold's tribe. Each pillar features a bell and water barrel for any who approach, including strangers, for whom the pillars are as close to the holds as they are allowed. Ringing the bell draws a child of the hold on horseback toward them for a greeting and to summon greater aid if necessary.[2] 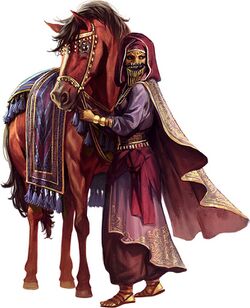 An Al-Zabriti rider and horse.

The Al-Zabriti are notoriously secretive, and are considered by some to be even hostile toward outsiders. The reality is somewhat more complex: while enthusiastically hospitable according to Althameri tradition, they also steadfastly protect those traditions and the people and places close to them from outside influence—with force if necessary.[3][2]

Members of the Al-Zabriti look with some disdain on urban Althameri for abandoning traditions in favor of urban life, they still willingly defend all Althameri against outside criticism. Conversely, urban Althameri respect Al-Zabriti traditionalism even if they decline to participate in it.[3]

The Al-Zabriti welcome travelers in need of a night's rest with hospitality, and even celebration in the cases of larger groups, but such guests are limited to just inside the perimeter of a hold's pillars. If a traveler is escaping enemies, the tribe's defenders rally to their aid. Their hospitality ends there, however, as they forbid outsiders from entering their holds in order to protect both their traditional livelihood and the deserts that sustain and protect them.[3][2] They do respect and might trade with outsiders who demonstrate truly exceptional skill on horseback by winning a high-profile mounted race or competition.[7]

Al-Zabriti are reluctant to hire outside help and resort to do so only when they need proxies for tasks they themselves cannot (or should not) do.[3] They also kill directly only in self-defense, but are also willing to leave a disabled foe to the sparse mercies of the unforgiving Meraz Desert.[2]

Al-Zabriti insularity and self-sufficiency results in little trade with outsiders; the primary Al-Zabriti trade goods found in Qadira are caparisons, horseshoes crafted from mithral, and a variety of spices. Even so, they are still renowned across the Inner Sea region—and arguably much of Golarion—for their magnificent, genie-touched horses.[3][2]

The Al-Zabriti are perhaps most renowned by outsiders for their magnificent horses, which they breed themselves. The very finest specimens stay within the tribe's families as gifts, and stallions in particular are reserved to start a business for a family's eldest daughter. Geldings and mares unfit for breeding, on the other hand, are sold at an annual Saffeh Horse Fair.[2]

While Kelesh is known for the shissah, Al-Zabriti breeders produce four other distinctive breeds of horses with powers drawn from the very elements themselves thanks to genie magic: the istaheq, misayyah, tuanu, and zefaheen. Horses of these breeds are reserved for the Kelesh imperial throne, though they are sometimes bred with the more common shissah lines to highlight their most desirable features.[2]

Al-Zabriti magic items are crafted for their own use and rarely sold; they are usually found outside of tribal holds only in black markets or recovered from desert beasts' hoards. Such items include caparisons of resistance and cloaks of heavenly fire.[7]

Paizo published major articles on the Al-Zabriti in Adventurer's Guide and Qadira, Jewel of the East.