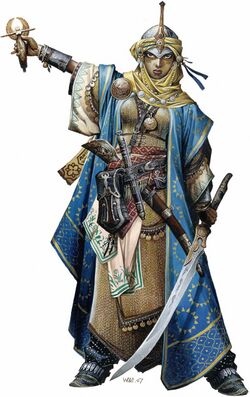 The Keleshites (pronounced KEHL-esh-eyts)[1] are a people born of the deserts of Casmaron, specifically the Padishah Empire of Kelesh, who reflect the heat of the desert in the fieriness of their passions. They are quick to anger and to forgive, and always pride themselves on their wit and intelligence. While Keleshites often have a racial arrogance that can be quite off-putting to outsiders, considering what they have achieved as a people, it is not surprising.[2]

Pure-blooded Keleshites always have black hair and brown or even golden eyes, and men generally grow out their beards. They favour light, loose-fitting clothes adapted to the desert heat and sand, with fashions that feature heavily embroidered designs decorated with expensive items as a display of wealth and power. Similarly, Keleshites often wear jewellery made of gold or silver. Headdresses, veils, and turbans are all common items of clothing to help keep the stinging sand out of eyes and hair. Many Keleshites who live in the deep desert have black or dark blue tattoos beneath their eyes to ward off the sun's harsh glare.[2][3]

Keleshites share some physical traits with Taldans, their ancestral cousins.[4]

Keleshites can be difficult, for they are a proud people with a great sense of superiority. Many value gregariousness and sly wit, leaving a memorably brash and colorful impression on others.[2] 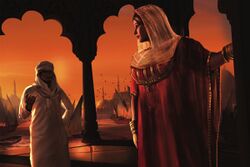 Many Keleshites claim credit for foundational discoveries of civilization, such as agriculture, as boons from genies or deals cut with blue dragons—claims that neither the genies nor dragons refute.[2][3]

Six distinct cultures are historically considered the founding peoples of Kelesh, with most Keleshites considering themselves citizens of their home region first, Keleshites second, and their traditional culture third. Each culture is associated with a virtue and region of Kelesh, regardless of where those who claim it are found today:[5] 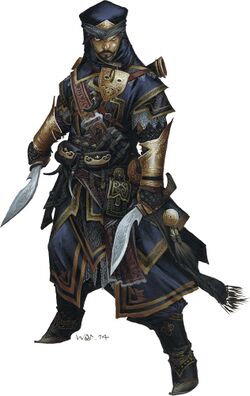 Most Keleshites speak Kelish, the language of their homeland, although most who reside in the Inner Sea region speak Taldane as well.[2][6] The Keleshites are great lovers of luxury and the Qadiran palaces of Katheer are renowned for their opulence. Horse racing is one of the favored pastimes of the rich, and wealthy Keleshites pay thousands of gold pieces for prize horses. Despite the wonders of their homeland, Keleshites posses an insatiable curiosity about the rest of Golarion that drives much of their trade with far-away lands.[3]

Keleshite culture has views on gender roles that much of Golarion finds odd. Female Keleshites are treated like princesses or priceless jewels, as it is they who will give birth to the next generation. The line of inheritance also goes through women rather than men. Keleshites claim that this stops the constant male fighting that is so common in many of the kingdoms of Avistan and Garund. The men, on the other hand, have to earn their place through whatever means they excel at. When questioned about this approach, Keleshites point to the long-lasting nature of Qadira as proof of how well the system works. Although, in truth, the back-stabbing of the women of Qadira and the lengths to which the men will go to ensure a desirable match are just as ludicrous as the conflicts of the rest of the world.[3]

Class often inspires how Keleshites grant names. Lower-class Keleshites draw from the horse cultures of central Casmaron alongside their clan and family names, while important and wealthy Keleshites use a single name derived from imperial Kelesh.[2]

Keleshite names can also be influenced by their traditional culture. Most who have no strong connection to a founding culture follow the conventions of the Althameri: a first name followed by a matronymic, with the prefix al- (such as Yaqib al-Marah, meaning "Yaqib, son of Marah"). When more specific identification is necessary, Althameri names can also include an ancestor, while in formal situations a tribal name, merchant house, noble family name, religious temple name, and home city might also be included (such as Yaqib al-marah Tiferi Bekhzadi Al-Hiraf, or Yaqib, son of Marah, a member of the Tiferi tribe and Bekhzadi merchant house, from Al-Hiraf). Members of the imperial family use the family name al-Parishat, with other names representing their branch of the family.[7]

Those associated with the ancient Aishmayar, or artists and socialites who try to foster an association with them, have a single birth name followed by a string of names related to their life's accomplishments (such as Nur-Iqar-Shamah). The Khattibi, who are the ancestors of most citizens of Kelesh, follow an individual's name with a familial name (such as Darya Sadikci), though traditionally that was reversed (as Sadikci-Darya). Mideans, long associated with wealth and patronage, use personal names followed by a patronymic or family name (such as Mizha ibn Illiar, though recently the ibn prefix is dropped). The rare minority of Susianams only use a first name. Tzorehiyi use a first name followed by their tribe's name (such as Nerzad Batgui).[5]

Many notorious slavers are Keleshites who use nets, poison, and bolas to capture victims for sale in the Great Market in Katheer.[2]

Kelesh trade brings Keleshite sailors to all reaches of Golarion, not only bringing luxuries from their eastern empire but also plundering slaves. Keleshite slave galleys also roam the Obari Ocean.[2]

No single deity is associated more with the Keleshite people than the ancient goddess of healing and redemption, Sarenrae.[8] Despite her popularity, however, many worship Abadar, Calistria, Irori, Norgorber, and even Rovagug. The zeal and impulsiveness common to many Keleshites sometimes results in Keleshites misinterpreting Sarenrae's teachings of efficient warfare as an excuse to battle frequently, leading to a nascent schism between these hawkish Keleshites and those more committed to Sarenrae's teachings.[2]