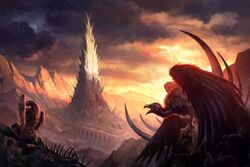 The Sunbleached Tower is a Meraz Desert landmark.

The Meraz Desert is a sweltering wasteland of rolling sand dunes in southern Qadira. It is bordered to the north by the Zho Mountains, and to the west and the south by the Obari Ocean. Only its westernmost section is considered to be part of Avistan; from there it extends eastward into Casmaron and beyond the knowledge of Inner Sea mapmakers.[1][2]

Although the desert is dry and inhospitable, it has been a place where religious cults have blossomed and thrived, much to the displeasure of the dervishes of Sarenrae. Most of these religions are swiftly put down, but some persist, hidden among the dunes. Occasionally, the scouring winds uncover ruins hidden beneath the sands.[2]

More recently, it appears the vast desert is expanding. The farming settlement of Dimayen is currently being slowly overwhelmed by encroaching dust storms, which have already claimed half of the buildings and farmsteads.[3]

Amellas al-Hekbah is a mercenary organization, staffed by desert giants, that provides protection to caravans traversing the Meraz Desert and the Ketz Desert in Qadira and beyond into the Padishah Empire of Kelesh.[4]