The reason they have remained a constant in Galt is their anonymity: all members of the Gray Gardeners wear gray silk veils to protect their identities. Several different Revolutionary Councils have demanded that they reveal themselves, but the Gray Gardeners realize that anonymity is their best protection from the bloody justice of mob rule. They are based in the city of Litran, where the presence of their imposing monastery actually serves as a stabilizing presence, keeping away the roaming mobs that plague the rest of Galt. Despite this stability, Litran is not a welcoming place, as the Gray Gardeners are not friendly towards outsiders.[1] 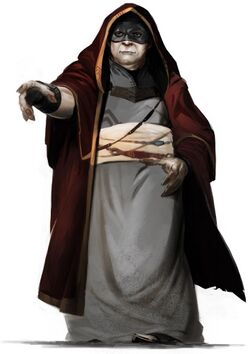 Though wildly popular with the Galtan mob, Gray Gardeners are rightly feared by certain members of the populace for their abilities in tracking and interrogation.[2]