The Order of the Gate is a Hellknight order that specializes in summoning and treating with fiends from the Great Beyond, tasks that make even the other Hellknight orders nervous. It operates from its redoubt, Citadel Enferac, in the western Menador Mountains of Cheliax. Signifers of the order (i.e., arcane and divine spellcasters) outnumber the rank-and-file Hellknights three to one. The Order is led by Vicarius Giordano Torchia instead.[1] 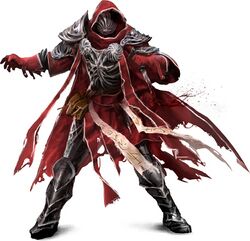 An Order of the Gate Hellknight.

Would-be Order of the Gate Hellknights can look forward to learning a measure of this spellcasting order's secrets, including invasive new scrying techniques, methods for shielding spellcasters, and the order's connections to planes beyond.[1]

Members of the Order of the Gate believe that arcane magic, extraplanar knowledge and manipulation are essential tools for preventing great crimes.[2] With their focus on the pursuit of knowledge given to them by their infernal servants, the crimson-cloaked signifers are seldom seen abroad in Cheliax. It is their extraplanar servants who perform most of the order's dirty work outside Citadel Enferac.[3] Nevertheless, the other orders have learned to respect the Gate's effectiveness, citing the many occasions when what seemed to be just vague predictions turned into perfect clarity with time.[2]

This order is shrouded in rumor and mystery, with the biggest being the true nature of the "gate" referenced in their name. Members of this Order dismiss this as simply metaphor bound to their belief in arcane and extraplanar magic, but rumors persist about a gate to Hell placed deep within the bowels of Citadel Enferac.[2]

Several paralictors from the Order of the Gate have lost their entire commands seeking to close down a rumored gate to Hell located within the Whisperwood in recent years.[5] The Order also recently faced defeat at the hands of the strix near Crackspike.[6]