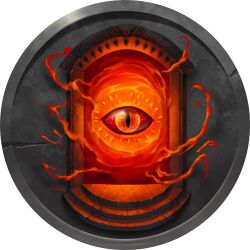 Symbol of the Order of the Gate.

Constructed by inhuman hands, only a small part of the fortress rises upon the slopes of Mount Nyisaid. The larger part of the citadel lies within the mountain, spread through great caverns and halls. The smoke of numerous forges and laboratories rises from the fortress like eerie pennants; and spiked towers and precarious walkways mar the higher slopes. At the top of the mountain, the iron statue of a huge Hellknight guards a gate for flying visitors. The citadel includes garrisons, training halls, armories, libraries, workshops, and fortifications. Tales also tell of a prison for terrible creatures within the citadel which resembles a pit into a black eternity.[2]

Deep within Citadel Enferac is a portal that leads to the Razor Stair, a library in Stygia, fifth level of Hell. The Order of the Gate's signifers frequently go there to consult with Mahshoka and Sister Drove, two uniilas who curate the Razor Stair. Despite decades of control, the Order of the Gate has not explored far beyond the portal due to the difficulty of navigating the Razor Stair; nevertheless, its members' sojourns have brought back many fantastic secrets and powerful weapons. Spies infiltrating Citadel Enferac have reported that this portal is no longer the only one within Mount Nyisaid, and nor is it the most terrifying.[3]

The creation of the citadel was funded by the wizard Sheel Leroung who was a political ally of Daidian Ruel. In 4599 AR, Lictor Aligois Thels granted the wizard 20 Hellknights to go into the western reaches of the Menador Mountains on a private venture. In return, the nobleman wizard funded the construction of a new Hellknight fortress there.[4]