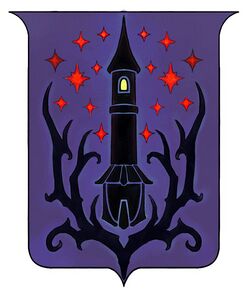 The Palace Tower forms part of the crest of Ustalav.

Rising from the former royal demesne of Stagcrown Palace in Ardis, the black Palace Tower was once the home of Ustalav's royal family. The Palace Tower was originally built by Soividia Ustav as a watchtower allowing the monarch to symbolically guard the entire nation.

Since that time, the Tower has seen many souls pass through its walls. It was here that the Shrieking Sovereign hung himself above the capital in 3206 AR. The Palace Tower was also host to the tragic romance of Princess Gaile Ordranti and Danstird Clase, heir to the Arch-Duchy of Melcat. Since 4674 AR, when the capital of Ustalav was moved from Ardis to Caliphas, no light shines within the Palace Tower and the only residents are the ghosts of dead kings, forgotten nobles, and long-lost courtiers, who angrily haunt the Palace Tower's halls, resentful of the desertion of the ancient capital.[1]