A satyr is a type of fey with many humanoid-like characteristics.[1][2] 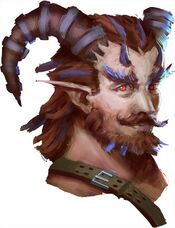 A portrait of a satyr.

From the waist up, their torsos resemble that of a muscular and attractive humanoid. A set of curled ram horns emerge from their handsome, human-like head. From the waist down, however, their legs appear more like that of a furry goat, complete with hooves.[1][2]

Satyrs exist in forests, where they serve as protectors of the woodlands. Unlike their smaller cousins, the faun, there are no female satyrs, forcing them to mate with other species (typically humanoid) in order to reproduce.[1] Encounters between satyrs and women of other species typically produce satyr children, but when a satyr procreates with an especially virtuous woman the child may be a faun instead.[3]

Hedonistic by nature, satyrs enjoy seducing members of humanoid races, resorting to their enchanted flutes if necessary to win over their victims. The children born from these encounters are always satyrs themselves, and are usually stolen from the mothers by their satyr kin.[2]

Satyrs often associate with korreds, accompanying the dances of the smaller fey with panpipe music.[4][5]

Like many fey in Golarion, satyrs are most common in the woodlands of Kyonin. While the elves there treat the unpredictable fey with respect and caution, many satyrs have become tainted by the demonic influence of Treerazer. Once jovial groups of fey have since become roving gangs of vicious brutes, prowling the forests for victims.[6]

There is a major chapter about satyrs in Fey Revisited.