A scion of a powerful demon lord, but now permanently banished to the Material Plane, Treerazer is a hugely powerful nascent demon lord who has twisted the land, creatures, and flora around his adopted home for hundreds of years. Treerazer's unholy symbol is a bleeding tree split in half.[1]

Treerazer began life in the Abyss, but little is known of his exploits as a demon before his ascension. Whatever he did, it impressed his lord and father Cyth-V'sug enough to risk raising him to the role of a nascent demon lord. Cyth-V'sug's gamble did not pay off, however, as Treerazer was an ambitious creature and attempted to usurp his lord's position. Exactly what transpired is difficult to determine. Certainly, Cyth-V'sug was not overcome, but whether the demon lord banished him to Golarion[2] or Treerazer fled there to evade his former master[1] is a question for debate. In any case, his exile effectively "froze" Treerazer's ascension to a demon lord, although he is capable of granting divine spells to worshipers. Being so completely severed from the Abyss has had an interesting side effect: if Treerazer is killed, his essence will not return to the Abyss—his death would be permanent.[3] 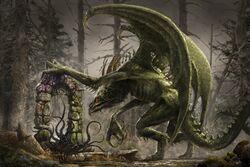 Banished to Golarion sometime during the Age of Darkness, Treerazer found Golarion to his liking and spent many centuries wandering its many nations. It was not until 2497 AR that he discovered the land of Kyonin and learned of the exodus of the elves. When he learned of the Sovyrian Stone, Treerazer concocted a plan to obtain it and turn it into a permanent portal to the Abyss. In 2632 AR, the elves detected this plan and returned to Golarion before Treerazer could put it in motion. In the ensuing centuries, they drove him away from the heart of Kyonin into a swamp known as Tanglebriar, but have been unable to destroy him.[4][5]

Since the closing of the Worldwound at the end of the Fifth Mendevian Crusade in 4718 AR, some of the holy warriors have relocated to Kyonin and offered their expertise in fighting demons to the elves.[6]

Treerazer makes his home in the massive twisted tree known as the Witchbole, serving as the bogeyman of elven culture—a tale with which to scare elven children that is, unfortunately, all too real.[1][3] He can be encountered anywhere within Tanglebriar, often accompanied by allies like demons and corrupted fey. Some believe that he could travel across Golarion if he wanted to, but the cunning Treerazer prefers to work his evils from the safety of Tanglebriar.[7]

Treerazer is a huge demon that resembles a dinosaur that has sprouted dragon-like wings. At 20 feet tall, he towers well over most humanoids, and even over many giants. Wherever he walks, a trail of small, diseased mushrooms sprout up in his wake, only to disintegrate back into filth moments later. Any living creature near Treerazer is likely to start sprouting fungus from its skin as well. His personal weapon, Blackaxe, is carved from obsidian and constantly drips acid from its chipped, uneven blade.[8][1]

Treerazer's sworn enemy is the elf god Ketephys, who personally fought in the war that contained him in the Tanglebriar. Ketephys seeks to purge Treerazer and his influence from Golarion, and instructs his followers to watch over Treerazer and Cyth-V'sug at all times.[9][10]

Although Treerazer is estranged from his father, Cyth-V'sug, the waning of the latter's influence in the Fangwood and the closure of the Worldwound have sparked fears that they might reconcile and join forces. Together they would have enough strength to take over Kyonin and beyond. Scouts and skirmishers are also perpetually looking out for any alliance that either might form with Tar-Baphon.[5]

Most of Treerazer's followers live in Kyonin, within or near Tanglebriar. Consisting mostly of corrupted fey and elves, they are quite secretive, but also quite sadistic, eager to sacrifice anyone who does not pay proper homage to the Lord of the Blasted Tarn. The rare followers of Treerazer who dwell outside Kyonin are usually loners or lead very small cults.[1][7] Treerazer is also worshipped by several small tribes of orcs that dwell within the Tanglebriar and make up for their lack of numbers with exceptional viciousness.[11]

The glabrezu demon Mokravud is one of Treerazer's lieutenants, and unusually for his type, practices great patience and subtlety when targeting his victims. He has served the Lord of the Blasted Tarn for centuries, and prefers going after select elven officers, rather than decimating entire platoons.[12] Another demon in Treerazer's service is the hezrou Vamollaroth, a gigantic member of his species, who is known to the elves of Kyonin as the Rancorous Wrath.[13]