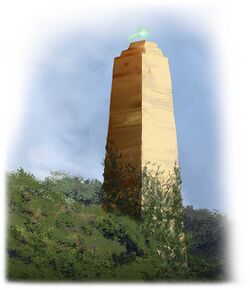 The Aeon Towers are a series of five adobe towers, four located in the Swardlands in the western Isle of Kortos, and the other on the Isle of Erran. They were built early in the isles' history by Aroden to house the aeon orbs, which magically enhance the fertility of the surrounding area in a 15-mile radius.[1]

Since Aroden's death, the divine magic that protects the towers and the aeon orbs has started to fail. The tower near Meravon that sustains the nearby Immenwood grows weaker every year. The tower near Willowside has lost its aeon orb to unknown thieves, rendering it unable to hold back the Welt: a strange environmental degradation that grows from the western part of the Dunmire a mile per year. Only three Aeon Towers now function normally, and it is unknown how long they could last before the Isle of Kortos' agricultural prosperity fails with them.[1]