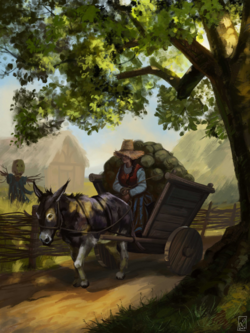 A donkey pulls a cart through the Swardlands.

The Swardlands are the plains located in the western Isle of Kortos. The breadbasket of Absalom, they owe their fertility to the four Aeon Towers and their aeon orbs, which have magically sustained their flora since Aroden raised the Isle of Kortos from the Inner Sea. Since Aroden's death, two of the Aeon Towers have failed, and it is unknown how the remaining ones can endure before Kortos' agricultural bounty fails.[1]

The Swardlands are not only threatened by the lack of agricultural productivity due to the Aeon Towers' loss of power, but also by the ever-expanding Welt. This blight begins at the western edge of the Dunmire, and continues to expand to the west at a pace of a mile a year.[1]