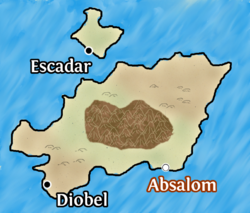 The Kortos Mounts, at the center of the Isle of Kortos.

The Kortos Mounts occupy much of the inner, less-inhabited, and still wild portions of the Isle of Kortos within the domain of the city-state of Absalom,[1] and are among the most jagged and highest peaks in the world.[2] The mountains are typically forested at lower altitudes but barren and icy at their peaks.[1] Some of the peaks are volcanic.[2] Despite passage through most of the range being nearly impossible, rare metals and gemstones are still mined from them and then exported to other parts of the world.[1][2]

The Kortos Mounts cover an area of approximately 3,000 square miles in the center of the Isle of Kortos. The lower slopes of the southwestern foothills are comparatively fertile and covered by forests and alpine meadows, which are interspersed with farms, ranches, and mining settlements. The northeastern slopes, in contrast, are more arid and inhospitable. Above this, comes an area of high passes and plateaux leading to the permanent snowline at 15,000 feet of elevation. The Mounts' highest peak, the centrally located Arazlant Mox, reaches 26,000 feet in height.[3]

The Kortos Mounts loom large in the minds of the inhabitants and visitors of Absalom, as the silhouettes of the mountains, some covered in snow and ice, form an easily identifiable landmark to all. Each of its peaks has its own legends and tavern songs and has significant cultural significance.[4]

The Kortos Mounts were raised alongside the rest of the Isle of Kortos when Aroden raised the Starstone from the Inner Sea. The mountains where barren and inhospitable compared to the island's lowlands, and were mostly ignored by the island's settlers. The Mounts remained largely deserted until a force of centaurs, minotaurs, and harpies brought to the island as part of an attempt to conquer Absalom was forced to flee into the mountains after their army was defeated. These beings settled at various heights in the mountains, but the difficulty of maintaining ties across the harsh mountain range caused them to scatter into numerous small tribes and communities. Warlords occasionally attempt to unite these groups into a force strong enough to threaten Absalom, but the city's leaders typically deal with these leaders before they can become a threat. The last such warlord, the dragon Maejerex Steeleye, was slain in 4592 AR.[3]

Tribes of minotaurs, ice-demon-worshipping harpies, and centaurs inhabit the mountain range, constantly battling one another and intruders in their territory, but drakes, wyverns, and even dragons have been seen here as well. The harpies primarily inhabit the edge of the tree line, while the centaurs occupy the lower slopes and foothills. The drakes and dragons lurk nearer the rocky peaks of the Kortos Mounts.†[1][2][4] The tribes that worship demons (particularly Baphomet and Pazuzu)[9] have been known to hurl sacrifices into massive crevices in the mountains.[1] The centaurs constantly wage war with the minotaurs in particular, and hunt down horses upon the island, seeing them as invaders.[2]

Dragons have claimed the Kortos Mounts as home from time to time, but have usually been slain by adventurers by the time they have reached adulthood. The last major dragon to survive in the Kortos Mounts was the amethyst-colored wyrm Maejerex Steeleye, who survived 500 years before being slain in 4592 AR as she was beginning to unify the minotaur and harpy tribes.[2] Since then, blue and red dragons and chimeras have been spotted every few years.[2]

For some reason, teleportation magic tends to be unreliable in the Kortos Mounts. The exact reason for this is unknown, although scholars argue it was either an after-effect of Aroden's raising on the island with powerful magic or some old ward placed by the great wyrm Maejerex Steeleye.[10]