This page contains spoilers for the following products: The Waking Rune, Runeplague. 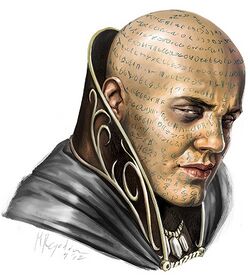 Krune (pronounced KROON)[1] was the last runelord of sloth and ruler of the realm of Haruka. While not as violent as other Thassilonian rulers (generally attributed to his laziness), Krune was not to be trifled with as he was the chief priest of the goddess Lissala. None of his enemies wanted to risk the ire of a man who had truly mastered rune magic as they did not know the limits of his power.[2]

Krune's weapon of rule was a dragon-tooth longspear that could move and attack on its own, freeing him from the physical rigors of combat. He also possessed a rod carved with secret runes of the priesthood of Lissala. Krune was a short, bald man with beady eyes, and his own flesh was tattooed with the symbols and formulae for a hundred secret spells; no other mention was made of his appearance.[2][3]

Krune began studying conjuration in the Great Temple of Lissala in Bakrakhan, eventually becoming Lissala's high priest in -5530 AR and a favoured counsellor of Runelord Ivarinna. Ivarinna chose him as her successor, and peacefully relinquished her title to him in -5525 AR. During Krune's reign, Haruka was largely free of war, and the cult of Lissala rose in prominence, coming into conflict with the cult of the Peacock Spirit, which was well-established in Haruka before Krune's reign.[3][4]

To prepare for the cataclysm of Earthfall, Krune separated his soul from his body, preserved it in a gem, went to sleep in a sarcophagus in a subterranean hideout in northern Haruka and instructed Lissala's followers to free him after a century, once the dangers had passed.[4][5][6]

Krune was too lazy to build a kingdom after his return, so before he went to sleep, he created a number of refuge tokens, hid them across Golarion, and protected them with traps and guards, ensuring that his servants could not free him until they had already taken control of a kingdom for Krune to rule.[5][7]

However, Krune failed to anticipate the true impact of Earthfall, which almost destroyed Lissala's cult and ruined his plan. It took the Lissalans until 4713 AR to revive Krune, but he only lived long enough to be defeated and killed by agents of the Pathfinder Society.[5][8]

After Krune's death, Leptonia, a cleric of Yamasoth, searched for a scroll of true resurrection to resurrect him: she needed a powerful conjurer to help her engineer the polymorph plague, and decided that Krune was the best candidate that could provide her with conjuration secrets, either as payment for his resurrection or by grisly, forceful extraction.[9][10]

Additional works published by Paizo Inc. in which Krune appears: