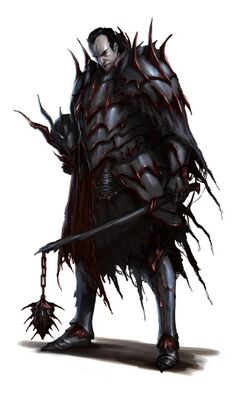 The Order of the Godclaw (sometimes written "Order of the God Claw"; sometimes referred to as the Hellknights of the Godclaw) is a Hellknight order that extols the virtues of five deities, distilling select tenets into a dogma far from any one god's faith.[1][2] Not content with seeking divine approval for their knighthood's righteous path, the Order of the Godclaw's members have sculpted their beliefs from the harshest, most exacting philosophies of five lawful deities: Abadar, Asmodeus, Iomedae, Irori, and Torag. Remade as five stern, armoured paragons, the deities of this pantheon are known collectively as the Godclaw. The Hellknights follow revised doctrines to stamp out disorder, particularly its divine embodiments and beings of absolute chaos, with religious zeal. Rather than targeting the faiths of prominent religions, the order sets its eyes on supporting lawful crusades (such as the wars fought by Molthune and Mendev) and being at the vanguard of battles against the forces of chaos. No land is beyond the lawfulness provided by Hellknights—a fact the Order of the Godclaw endlessly seeks to prove.[3]

The cunning Lictor Resarc Ountor leads his order from Citadel Dinyar in Isger, at the headwaters of the River Iseld.[1]

Although members of the Godclaw pay homage to the lawful doctrines of the gods Abadar, Asmodeus, Iomedae, Irori, and Torag, it is uncertain from where they get their divine power; it may be the case that their magic comes from their own convictions.[1]

Other Hellknight orders enforce their visions of law out of duty and necessity, but the Godclaw is inspired by religious zealotry and a clear belief that the world must learn the righteous path through force.[1]

In 4715 AR, Iomedaean knights of the Glorious Reclamation raided Citadel Dinyar and reclaimed an artifact of their goddess. The assault inspired rebels inside Cheliax, leading to the empire declaring martial law in several of its cities.[5]

Paizo published an article about the Order of the Godclaw in Disciple's Doctrine 12f.