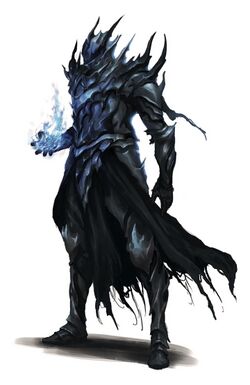 An Order of the Pyre Hellknight.

The Hellknight Order of the Pyre was organized in Kuthona of 4609 AR by Lictor Aligois Thels. This Order seeks out fanatical and blasphemous witches, warlocks, cultists, shamans, mystics and madmen throughout Avistan and purges them with flame and steel. While not one of the original Hellknight Orders, the Order of the Pyre's fanatical devotion to hunting cultists hearkens back to the original traditions of the Hellknights.[citation needed]

Whether unhealthy beliefs take root in the minds of religious fanatics, practitioners of strange mystical arts, or students of radical philosophies, the Order of the Pyre strives to stamp out all outlandish convictions. This philosophy has given these Hellknights a well-earned reputation as cultist hunters who are intolerant of religion. Yet the Order of the Pyre also seeks to thwart philosophical revolutions and the insidious spread of dangerous ways of thinking. The order uses the faiths and mores of Chelish society as the standard of acceptable beliefs. The Inner Sea region's most common deities are acceptable to them, as are orderly philosophies such as diabolism and the Prophecies of Kalistrade. However, the order views whatever does not mesh with Chelish thinking or does not have an existing role within society as dangerous.[1]

The Pyre has few holdings in Cheliax besides Citadel Krane, whose walls are stained black from the ashes of countless burnt witches and heretical books. Members of this Order travel in small groups, staying close to hotspots of religious fanaticism.

Lictor Rouen Stought, a strict atheist, holds special hatred and fear for the pantheons of the Vudrani, and the Order has been working to purge immigrants from those distant shores of their heretical beliefs.[2]

Hellknights from this Order often come from families with deeply religious backgrounds, or those who have lived through the ravages of cults and madmen.[3]