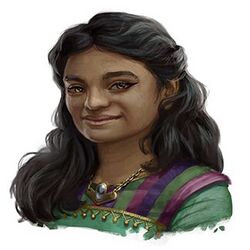 The Pahmet, also known as sand dwarves, are a dwarven culture native to Osirion. They are distinguished from other dwarves by their dark bronze skin.[1]

According to their legends, the Pahmet were messengers from the gods. However, many believe they were more likely servants or slaves. Rumor holds that the Pahmet guard the royal tomb of an entire Osirian dynasty.[2]

Regardless of the legends and mysteries that surround the sand dwarves' origins, pharaohs of ancient Osirion sought advice from the long-lived Pahmet. Goodly and compassionate pharaohs who earned the Pahmet's respect also gained their service as courageous and competent bodyguards.[1] 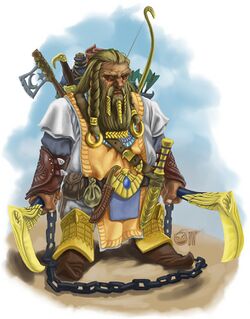 The Pahmet modeled their signature hammer-based fighting style around the resilient, immovable traits of sphinxes, creatures they particularly respect. As such, moves in this style are named after different types of sphinx, such as the charging Horn of the Criosphinx or kinetic Wings of the Androsphinx.[1]

The Pahmet worship the dwarven pantheon, particularly Magrim, then Grundinnar, and Kols. With their connections to sanctifying the dead and their tombs and cleansing them of undead interlopers, many Pahmet also venerate Pharasma.[1] 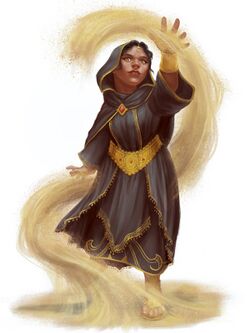 A Pahmet dwarf shapes the sands to her will.

The sand dwarves claim underground parts of Osirion's southwestern mountains between Mount Osiki and Kho-Rarne Pass as their sovereign territory and are hostile toward disrespectful or threatening outsiders, allegedly on the orders of an ancient dwarven pharaoh of which no known records exist.[2][3] This ancient and complex code is known only to the Pahmet and often befuddles outsiders. The hostile Brazen Frontier is rife with gnolls and slavers, both of which the Pahmet meet in battle.[3] Most, however, help others in need, and otherwise simply pray and perform rituals near the tombs and necropolises of the ancient pharaohs they once served. Many of these Pahmet hold the sanctity of these honored dead above all else.[1]

Many Pahmet in the southwestern mountains dwell near the monastic city of Tar Kuata. Tar Kuata is home to the dwarves' wise brothers, the Ouat, and the place where they study their ancient fighting style, an unarmed version of the Pahmet's hammer mastery.[4][1] An Pahmet settlement with no known name is near Oxjaw Falls, off the Crook River.[3]

Sand dwarves also live in parts of the Inner Sea region where ancient Osirion once held sway, including Katapesh, Thuvia, and Rahadoum, with some settling near lairs of sphinxes whose counsel they seek. Some especially honored emissaries from Pahmet settlements to sphinx lairs learn to share a love for riddles, puzzles, and ciphers.[1]

West of Mount Osiki in southern Osirion, a small clan of the Pahmet dwell in a subterranean necropolis called Erekrus. Erekrus is built on the side of the mountain and serves as a necropolis for pharaohs who were noble and worthy for Pahmet's blessings. In Ancient Osirion, it was a great honor to be blessed by the Pahmet. The dwarves gave their blessing only to really worthy pharaohs. It was known that the pharaohs who tried to suborn or threaten the dwarves, inevitably had a horrible fate.[4][5]

Oe-Tet is a Pahmet settlement in the Brazen Frontier area of Osirion. The sand dwarves created this settlement to facilitate trade, without allowing foreigners into their other settlements. Traders are grudgingly let into the settlement, provided they do not stray too far from the bazaar and inns.[6]

Although a pharaoh, the Ruby Prince Khemet III, rules modern Osirion, the Pahmet have not indicated whether they support or would serve him as they have his distant predecessors.[1]

Paizo published articles about the Pahmet in People of the Sands 14–15 and Heroes from the Fringe.