Following shortly behind the popular GameMastery Module Open Call contest in 2007, Paizo announced that it would hold an even larger contest which would involve six rounds of competition and allow for fan voting entitled RPG Superstar.[1] Specific challenges included designing a wondrous item, a country, a villain, three thematically linked monsters, an encounter, and finally an adventure synopsis.

The contest would become an annual event; in retrospect, this year's contest is referred to as RPG Superstar 2008 or RPG Superstar Season 1. 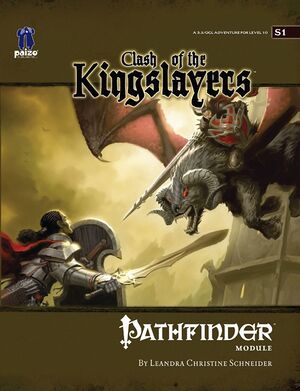 Cover of the winning adventure, Christine Schneider's Clash of the Kingslayers.

On February 20, 2008, Paizo announced Christine Schneider as the contest's winner, and her adventure Clash of the Kingslayers was published in January 2009.[2]

The Top 4 contestants were announced on January 30, 2008. Each entrant submitted an adventure proposal for public voting to determine the winner of the contest.[3]

Round Four called for the Top 8 to design three thematically linked monsters. Six RPG Superstar contestants were selected by the voting public to move on to the penultimate round of RPG Superstar. The voting public seemed willing to follow the lead of the judges this round and voted out the two contestants that received the lowest overall scores from Erik Mona, Clark Peterson, and Wolfgang Baur.[4]

On January 3, 2008, Paizo announced the eight RPG Superstar contestants selected by the voting public to move on to Round Four. This round focused on the creation and design of a unique character to fill the role of villain in any campaign.[5]

Paizo announced the 16 RPG Superstar contestants selected by the voting public to move on to Round Three on December 12, 2007. It was a close race, with the 17th-place contestant missing the Top 16 by just a handful of votes.[6]

For the initial open call, more than 850 entrants submitted a wondrous item using the 3.5 SRD. Each entry needed to be 200 words or less and had to include proper mechanics and flavor. From this pool, the Top 32 finalists were selected to write a 1,000-word description of a fantasy nation covering that nation's people, history, geography, government and hidden secrets.[7]