In a change of procedure from previous years, the public was allowed a glimpse of the entire submission pool in this year's contest and voted on randomized pairs of submitted wondrous items, resulting in the each item being ranked for easier analysis by the judges. The process was a resounding success, and nearly half a million votes were cast over the course of first round's voting.[3] 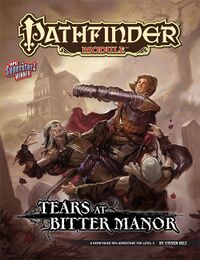 On April 2, 2013, competitor Steven T. Helt was declared the winner of the contest, his Round 5 entry ("The Golden Watch") earning the most votes during the week of public polling. The renamed Pathfinder Module, Tears at Bitter Manor, was released in March 2014.

Each of the runners-up had the opportunity to write a Pathfinder Society Scenario. Paizo published the RPG Superstar finalists' works as the three-part Destiny of the Sands arc, with Scott Fernandez's A Bitter Bargain released in January 2014, Matt Duval's Race to Seeker's Folly released in February 2014, and Pedro Coelho's Sanctum of the Sages released in March 2014.

On March 12, 2013, the Top 4 finalists in the 2013 RPG Superstar contest were revealed. The Top 4 contestants were each tasked with writing a proposal for a 64-page Pathfinder Module, to be decided by the public in a secret vote held over the course of an entire week.

Contestants advancing as far as the Top 4:

On February 19, 2013, the Top 8 contestants in the contest were announced, the results of a week of public voting on their Round 3 swamp monster submissions. Each competitor in the Top 8 was challenged to create a Golarion location, an encounter, and map to be playtested and voted upon by the public to determine the year's Top 4 competitors.

Contestants advancing as far as the Top 8:

On February 5, 2013, 16 competitors advanced to the Top 16 after a week of public voting on their Round 2 River Kingdoms archetype submissions. Each competitor was then tasked with creating a Bestiary-style monster entry for judging during Round 3.[4]

Contestants advancing as far as the Top 16:

Of the hundreds of contestants who submitted wondrous items for round 1 of the contest, the following contestants were selected as the Top 32 entrants. Announced on January 22, 2013, each of these contestants submitted an archetype suitable for the River Kingdoms region of the Pathfinder campaign setting for public voting to determine the Top 16.[5]

Contestants advancing as far as the Top 32: