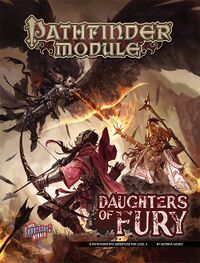 On March 11, 2014, Paizo announced that Victoria Jaczko was 2014's RPG Superstar for her module pitch for Daughters of Fury, which was released in February 2015.[2]

On February 18, 2014, Paizo revealed the Top 4 finalists in the 2014 RPG Superstar contest. Each won the opportunity to write a Pathfinder Society Scenario in the following year, and Paizo would publish the winner's proposed Pathfinder Module. The Top 4 contestants were each tasked with writing a proposal for a 64-page Pathfinder adventure, to be decided by the public in a secret vote held over the course of a week.[3]

Contestants advancing as far as the Top 4 were

On February 4, 2014, 16 competitors advanced to Round 3 after a week of public voting on their Round 2 monster submissions. One competitor's monster was disqualified, and he was replaced by an alternate. Each competitor was then tasked with creating an encounter with tactical map for judging during Round 3. Unlike previous years, instead of the field halving to a Top 8, only 4 contestants would advance to Round 4.[4]

Contestants advancing as far as the Top 16 were

Contestants advancing as far as the Top 32 were