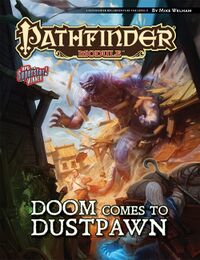 Mike Welham was declared the winner of RPG Superstar 2012 on April 3, 2012. His adventure, Doom Comes to Dustpawn, was released in May 2013 as part of the Pathfinder Modules line.[2]

The three runners-up had the opportunity to write Pathfinder Society Scenarios during Season 4. Steve Miller's The Refuge of Time was released December 2012, and James Olchack's My Enemy's Enemy and Tom Phillips's The Fabric of Reality were released in February 2013.

Contestants advancing as far as the Top 4

The Top 8 contestants were announced on February 21, 2012. Each was tasked with crafting a tiered encounter with a map, in the style of a Pathfinder Society Scenarios, which were given a week for the public to playtest before voting opened.[4]

Contestants advancing as far as the Top 8

The Top 16 contestants, chosen by the voting public from the Top 32 archetypes in Round 2, were announced on February 7, 2012. Each progressing entrant submitted a monster concept and statblock.[5] The judges disqualified Bob Drouin during voting for discussing his Round 2 entry, and no alternate was advanced to replace him.[6]

Contestants advancing as far as the Top 16

Of the hundreds of contestants who submitted wondrous items for round 1 of the contest, the judges selected their Top 32 and three alternates. Announced on January 24, 2012, all but one of the Top 32 submitted a villainous organization for public voting to determine the Top 16.[7] Garrett Guillotte withdrew[8] and Jason Neals did not submit an organization,[9] allowing alternates Andrew Newton and Benjamin Medrano to advance in their place.

Contestants advancing as far as the Top 32