RPG Superstar 2015, which ran from December 9, 2014, to March 24, 2015, marked the first time Owen K.C. Stephens hosted the contest, the return of the Top 8 round, and the first RPG Superstar contest where wondrous items were excluded in the initial open call for magic items.

The panel of judges included: 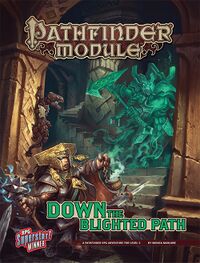 Down the Blighted Path.

On March 24, 2015, Paizo announced that Monica Marlowe had won RPG Superstar 2015 with her Pathfinder Module pitch for Down the Blighted Path, expected to be released in January 2016.[1]

The RPG Superstar finalists are expected to be offered the chance to write Pathfinder Society Roleplaying Guild scenarios for the Year of the Serpent.

Each of the Top 8 contestants submitted an encounter set in Nar-Voth by February 20, 2015. Paizo revealed the submitted encounters and opened public voting on February 24, 2015.[2]

On March 3, 2015, Paizo revealed the Top 4 finalists of RPG Superstar 2015 after a week of public voting on their Round 4 encounter submissions. Each of these designers was tasked with pitching a 3,000-word proposal for a 32-40 page adventure, designed for 5th-level characters and set in Nar-Voth, by March 13, 2015.[3]

Contestants advancing as far as the Top 4 were

Contestants advancing as far as the Top 8 were

Each of the Top 32 contestants submitted a map by January 23, 2015, and submissions were revealed and voting began on January 27, 2015. On February 4, 2015, Paizo revealed the Top 16 quarter-finalists of RPG Superstar 2015 after a week of public voting on their Round 2 map submissions.[5] Top 16 selection Jason Keeley withdrew himself from the competition on February 3, and Newton Philis, the contestant who placed 17th in voting, advanced.[6] It was later revealed that Keeley withdrew from the contest because he had been hired as an editor at Paizo.[7]

Contestants advancing as far as the Top 16 were

For the first time, the Open Call round sought magic weapons, armors, staves, rods, and rings, but not wondrous items. Of the hundreds of contestants who submitted items for Round 1 of the contest, Paizo announced the selection of the following contestants as the Top 32 entrants on January 20, 2015.[8] On January 29, Top 32 selection Olivier Rayé-Lalonde was disqualified for elaborating on an entry, and alternate Allana Siliwinski advanced.[9]

Contestants advancing as far as the Top 32 were