The competition went on an indefinite hiatus after season 9.

Jason Engle was announced as a Round 2 judge but did not participate.[5] 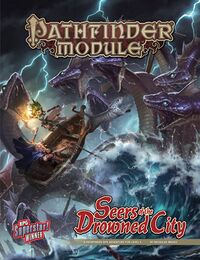 Seers of the Drowned City.

On October 30, 2015, Paizo announced that Nicholas Wasko had won RPG Superstar Season 9 with his Pathfinder Module pitch for Beneath the Storm-Veiled Spires. The module was released on November 16, 2016, renamed Seers of the Drowned City.[6]

On October 19, 2015, Paizo announced the Top 4 contestants. These contestants were then tasked with writing a 2,000-word Pathfinder Module pitch for 5th-level characters set in the Sodden Lands, and focused on a location-based adventure. Voting began on October 26 and ended on October 29, with Paizo announcing the winner on October 30.[7]

The RPG Superstar finalists wrote Pathfinder Society Roleplaying Guild scenarios during its eighth season: The Sandstorm Prophecy by Charlie Brooks, Secrets of the Endless Sky by Crystal Malarsky, and Caught in the Eclipse by Jason Evans.

Contestants advancing as far as the Top 4

On September 28, 2015, Paizo announced the Top 8 contestants. Those contestants were then tasked with creating a CR 6-9 encounter, set on Golarion and using Flip-Mat: Haunted Dungeon, Flip-Mat: Battlefield, or Flip-Mat: Pub Crawl, by October 1. The entries were open for voting from October 5 to October 18, and the results were announced on October 19.[8]

Contestants advancing as far as to the Top 8

Contestants advancing as far as the Top 16

On September 18, 2015, host Owen K.C. Stephens announced that a Top 16 contestant had been disqualified. No cause was given, and no alternate was promoted.[11] On September 21, 2015, BJ Hensley's monster was not posted and she stated she was the disqualified contestant as she had accidentally omitted her creature's saving throws during the submission process.[12][13]

The Open Call round opened to wondrous items and specific magic weapons and armors on August 7, 2015. Voting began on August 17, 2015, and concluded on August 30. Paizo's announcement of the Top 32 was delayed to September 1 for unspecified reasons.[14]

Of the hundreds of contestants who submitted items for Round 1 of the contest, Paizo announced the voters' selection of the following contestants as the Top 32 entrants on September 1, 2015.[15]

Contestants advancing as far as the Top 32