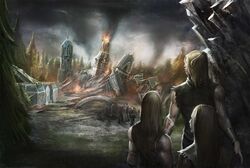 Metals from distant planets and fallen stars are known as skymetals. These metals are extremely rare and very expensive, such that the impact of a meteoroid can cause gold rush-style events. There are seven known skymetals, each with its own particular properties.[1]

Abysium (also known as feverstone)
Abysium is a blue-green stone that glows and has a great deal of energy to be found within it. It also sickens those who spend time around it.[2] Abysium is rumored to have certain mystical properties, as portals to the realm known as the Dark Tapestry made of the toxic metal have been found in ancient caves below Absalom.[3] It can also be ground into a powder and distilled to concentrate its poisonous effects.[4]

Adamantine (also known as Numerian steel)
Adamantine is the most common skymetal. It is sometimes known as "Numerian steel" after the land where the largest known deposits are found. It is so tough that it often survives the brutal entry through Golarion's atmosphere.[1] Weapons made of adamantine are incredibly hard and durable, able to cut through almost any material with ease. It is also often fashioned into incredibly dense, protective armor.[5]

Djezet (also known as quickiron)
Djezet is a rust-red metal only found in a liquid state, no matter what the temperature. It is supposed to enhance the power of spells and the potency of magic items constructed with it.[2]

Inubrix
Inubrix is said to be able to pass through iron and steel as though it were capable of phasing in and out of reality.[2] Nearly as soft as lead, it is the softest solid skymetal.[6]

Noqual
Noqual is one of the rarer types of skymetal and has magic-resistant properties. It appears to be a pale green crystal but can be forged like iron. It has half the weight of iron, yet is just as strong.[7] Crafting magic items from noqual requires expensive alchemical treatments.[6]

Orichalcum (also known as horacalcum)
Orichalcum, sometimes known as horacalcum, the rarest of skymetals, is a coppery, sturdy metal said to bend time around it.[2] While prohibitively expensive, armor made from orichalcum reputedly slows the wearer's perception of time.[6]

Siccatite
A bright silver metal, siccatite is found to be either very cold or very hot. It is unclear if this represents two different metals or two states of the same metal.[2]

Whether from alien sources or extremely skilled smiths, skymetal alloys produce specific effects or temper the metals' strange properties to make them more appropriate for use. Notable alloys include:

Djezeteel
A rarely seen alloy of djezet and steel produces a solid form of red djezet that retains its metamagical properties.[8]

Glaucite
This gray alloy of iron and adamantine is frequently seen in alien spaceship hulls and robot frames.[6]