The thriae (singular and plural) are a race of bee-like humanoids, all of them female. Many are renowned for their gifts of cryptic prophesying.[1]

Thriae have the upper bodies of slender, beautiful human women with long, thin insectoid wings. Their lower bodies consist of a bee's abdomen—including its stinger—and two insectoid legs. The average thriae is 6 feet tall and weighs between 140 and 200 pounds, with dancers and seers trending smaller in size and warriors larger.[2]

Despite their human appearance, many thriae take on the behavioral traits of bees. They are particularly observant and respectful of common bees and can call upon them for aid.[1]

Thriae live in hillside hives on the edges of civilization. Their society is split into several roles: the queen, who breeds and directs the colony; seers, who use their powers of divination to guide the colony; dancers, who entertain the colony; soldiers, who labor for and defend the colony;[1][3] and constructors, who design and build the hives.[4]

Thriae have a particular fondness for rare metals, such as gold and jewels. While they rarely trade wares with outsiders, they are often willing to share their prophetic abilities in exchange for treasure—including willing male consorts. Their average lifespan is about 200 years.[1]

Young thriae undergo several stages of growth, including larval and pupal stages. Queens store larvae within the hive's walls, and while they are more vulnerable than adults, thriae larvae are capable of bursting from their cells to feed on creatures who disturb them.[5]

There are no male thriae. Instead, thriae seek out men of other humanoid species to mate with their hive's queen, the only thriae capable of laying eggs. Many who seek the thriae's prophetic gifts offer physically fit men as consorts in exchange for their seers' services, though some hives seek volunteers from nearby settlements.[1] Such arrangements are for life as to prevent their prophecies from escaping their hives, and consorts are carefully selected due to their access to such secrets and intimate relationship with the queen. Consorts live in luxury and are kept in a merope-induced state of bliss until they die, whereupon they are put to sleep and painlessly eaten. Thriae rarely develop emotional attachments to consorts, though some non-breeding thriae select willing mates.[5]

Thriae are well versed in their own language as well as Common and Sylvan.[6][7][8] Thriae queens are also capable of telepathy.[6]

Thriae queens divide their hives' inhabitants into one of several roles early in their development.[5] Aside from queens, all thriae share many different professions independent of their assigned caste within the hive. Hive members scribe seers' prophecies, farm and raise cattle, and craft intricate works of metal art and jewelry.[1]

A queen selects her own successor from her larvae and feeds it a special royal merope that increases its size and accelerates its development into a fully grown queen upon hatching. A newborn queen must choose between succeeding her mother, who then becomes their mentor through succession, or striking out to form an allied colony of her own.[5] Elders determine other thriae's roles in the hive during their adolescence and assign them experienced "mothers" as their mentors.[1]

Among the thriae, queens are the most powerful diviners and fighters. Queens lead their colonies and are the only breeding thriae; most colonies have only one queen, though some larger colonies may have more.

A single queen produces up to 500 eggs in her lifetime, generates the colony's supply of merope through special glands, tends to its larvae, and governs its actions. Queens allow only the most capable thriae seers and soldiers near them, and grant few audiences to outsiders unless their requests are of incredible importance or exceptionally curious nature. Queens are physically powerful and capable of defending themselves, but due to their importance to the hive are also heavily defended by other thriae. Aside from a queen's skill with arms and magic and her venomous sting, she can also use her reproductive abilities as weapons, spewing tainted acidic merope at foes (or pure, healing merope at allies) and spawning swarms of wasps in her defense.[6]

Seers are spiritual and meditative thriae respected for their prophetic powers. They enhance their visions by consuming large quantities of merope. Within the hive, they counsel the queen's actions using their powers of divination, sometimes combining their powers to interpret particularly difficult visions, and help protect the queen from harm. The hive especially values seers who become oracles and sorcerers.[7]

Thriae colonies also train troupes of veiled dancers who perform exquisite, moving group pieces in the colony's largest hall. Like other colony roles, dancers are selected and trained from adolescence; however, dancers are prohibited from intermingling with other thriae, instead training with intense, merope-fueled focus in special temple rooms. The monthly group performances are open to all thriae, but not to male consorts, for fear that the presence of such beauty would drive them insane.[3]

Only the one or two most talented dancers are permitted to perform apart from the group, and only for the queen, seers, generals, and royal consorts. These exceptional talents, who occupy some of the highest roles in thriae societies aside from the queens, are known as terpsichoreans.[3]

Like seers, dancers consume large amounts of merope while dancing. The jelly pushes dancers to their physical limits and grants their movements a spiritually affecting nature capable of evoking emotional responses from even the most stoic thriae, inspiring her sisters or confounding non-thriae who watch.[3][9] 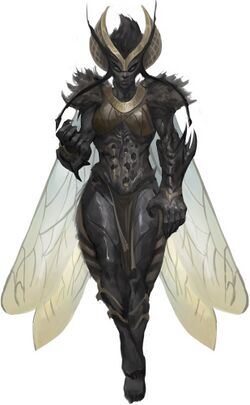 Soldiers are the most populous thriae. Agile defenders who prefer to use bows in combat, thriae soldiers are also trained in other weapons from youth and can apply venom from their stingers to their weapons. Many are skilled artisans who craft their own weapons from steel, gold, and amber-hued gems.

Soldiers gain courage and strength from merope, but the hive provides less to them as it doesn't inspire the same prophetic visions it does in seers, and its effects are relatively brief. They guard doors to vital parts of the hive, defending the meditation rooms of seers and the queen's quarters. Outside of the hive, soldiers travel in large groups.[8]

The least intelligent thriae are the constructors, masterful architects who average 18 feet in height, 30 feet in wingspan, and 5,500 pounds in weight. Despite their instinctual behavior and subservient status within the hive, they are master architects who build and fortify hives of an intricacy and strength that surpasses their insectoid relatives at massive scales.

When pressed to defend their hives, constructors use adhesive secretions normally used for construction, powerful venom, and sheer physical size and strength to batter enemies.[4]

A thriae hive exists in the Parched Dunes of Osirion, although it recently lost its queen to cultists.[10]