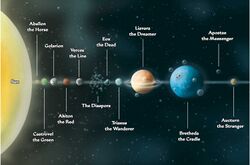 Damiar was a planet in Golarion's solar system that orbited between Verces and Eox alongside the planet Iovo. Together these two planets were called the Twins or the Sister Worlds. The planets were destroyed in some cataclysmic, historical event[1] that occurred at some point before the founding of Thassilon in the Age of Legend,[2] forming the asteroid belt now known as the Diaspora.[1]