Demodands are a fiendish race created by the thanatotic titans to be their loyal servants.[1]

As the first mortal life appeared on the Material Plane, the titans were said to be the first children of the gods. Some of these titans grew jealous of the worship the gods received from mortals and began a crusade to destroy mortal life. In the end, they were defeated by the gods and imprisoned in the Abyss.[1]

In the Abyss, the titans' festering hatred, their jealousy of the gods, and their arrogance led the thanatotic titans to create their own worshippers, beings of unquestionable beauty, skill and strength. They melded together the foul soil of the Abyss and water of the River Styx to make clay, sculpted it, and let their own blood flow into their creations.[1]

The first demodands were physically perfect, but only for a brief time before oozing into grotesque forms. Despite this deformation, demodands were still unquestionably loyal to their creators and considered their hideousness the ultimate expression of their chaotic origins. The thanatotic titans accepted them and tasked them with instigating anarchy and fighting the gods.[1] 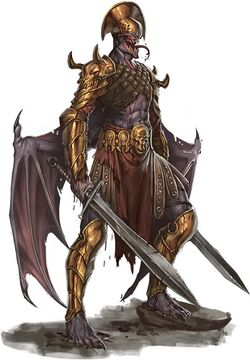 Demodands are almost uniformly powerful; due to each demodand's tiny spark of divinity, even the weakest type, the tarry demodand, is stronger than many outsiders. Created as lesser versions of thanatotic titans, they share their creators' hatred of divinity and resistance against divine magic.[1][2]

Demodands are oviparous and reproduce purely on their whim. Which type of demodand that hatches from an egg is determined randomly, no matter the type of the parents. There is no parental care among demodands: the parents will abandon their brood forever after their eggs are fertilised. When a clutch hatches, hundreds of blind infants emerge and start killing and eating their siblings out of rage (not hunger, as they are outsiders and need no food). Only one or two hatchlings survive per brood; for their part, the thanatotic titans and demodands alike see this conflict as necessary to make the demodand race stronger.[1][3]

Demodands owe no allegiance to anything other than the thanatotic titans; they have no society among themselves, always serve their masters' agenda, and will not hesitate to cut down other demodands if their master orders so. Some demodands, however, are loyal to an individual titan and will refuse to serve its patron's rivals, which usually ends up with punishment by death from the rival titan or by its own demodand servitors.[1]

Demodands believe that the thanatotic titans are destined to rule the universe, serve various roles in the titans' legions, and often undermine religions by capturing worshippers who stray into the Abyss and indoctrinating them into sharing their own belief. Successful converts are sent back to the Material Plane to establish anti-theist cults, while those who refuse are forced to labour or put to death.[1]

Since the thanatotic titans cannot freely leave the Abyss, the demodands serve as their proxies on the Material Plane, where they instigate heresy, deface sacred places, kill priests, and sow doubt among worshippers.[1]

Demodands engage in extensive slavery, capturing foes and breaking them to turn them into unwilling recruits. The most valuable captives are celestials (especially angels), whom they consider the incarnation of the divine, and demons, who compete with them over dominion of the Abyss.[1]

Demodands prefer to live in tight, enclosed spaces or cramped cities, whether in the Abyss or on the Material Plane. Most live near the protection of their masters, but sometimes they have to fight demons over ideal lairs or form nomadic gangs.[1]

Paizo published a major article about demodands in Herald of the Ivory Labyrinth.