Adowyn is a Nirmathi hunter searching for her long-lost family with her animal companion Leryn.

There's always a need for a skilled hunter, someone who can track down a threat and put an end to it. And when a quarry is particularly dangerous or elusive, there's only one hunter the people seek: Adowyn.

Born to a pair of skilled woodworkers in the quiet town of Crowstump on the northern border of Nirmathas, Adowyn was always a wild child, more comfortable sneaking around in the mud chasing the town rooster than practicing her letters or learning to carve. She grew up surrounded by peoples from far-away lands, merchants and traders who had come to make deals with her parents. Fascinated by their stories, Adowyn was eager to see the world beyond, and when a journey with her father finally gave her that chance at the age of fourteen, she was overjoyed.

That joy was short-lived, however. Not a day after Adowyn and her father left home for the dark forest trails of the Fangwood, a diseased bear charged into their camp, savaging Adowyn's father before she could even cry out. Using the bow her father had carved for her, she sank arrow after arrow into the beast, tears streaming down her cheeks. At last the bear fell. The creature was dead—but so was her father.

Lost in the woods, Adowyn found herself in the Blight, an area of the Fangwood where the trees grew thick with disease and rot. Worse still, she found that no matter which direction she walked, all paths led back to her meager camp. She spent six months alone there, hunting and scavenging what food she could find and honing her skills at the hunt. The beasts of the Blight were cunning and deadly, and making her the prey nearly as often as she was the predator. Yet all of that changed when she found Leryn.

Wounded by a fight with a rotting arboreal regent, the lean gray wolf was limping through a clearing when Adowyn chanced upon him. She knew right away that the wolf was not from this place, but rather was trapped in the Blight like she was. She approached him with a scrap of meat from her most recent kill, earning his trust. Over the following month, she nursed the wolf back to health and named him Leryn, after her father. She soon found that she could sense his mood, knowing instinctively when he was hungry, angry, or excited. They shared much with each other in those first months. She exulted in his feral appetites, his thrill of the hunt, and he learned to calm his urges, gaining her patience and determination.

Years passed, and the two became an inseparable team, learning to anticipate each other's moves and hunting together as one. Now the whole of the forest was their prey, but still they could not escape the Blight. Indeed, the rot in the wood seemed to be growing worse by the day, and neither hunter could shake the sense of something just beyond their reach, stalking them but never revealing itself. 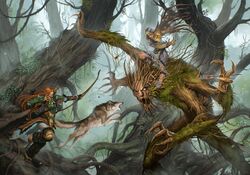 For months the tension grew. Adowyn and Leryn slept in shifts, keeping watch over their small hovel. Finally, in the dead of night, their mysterious watcher revealed itself, smashing the side of their home while unleashing a terrifying howl. Rolling out of the debris, Adowyn and Leryn rose to face the threat.

A gigantic bear rose up before them. Like the beast that killed her father, this one too was poxed, but it was far larger, with a sickly green foam spilling from its lips. Leryn leapt upon it, clawing and biting at its flank while Adowyn drew forth her bow. Taking aim, she sunk a shaft deep into its left eye. With an agonizing growl, the bear shook loose the wolf and tore off into the woods, with Adowyn and her friend in hot pursuit.

The chase lasted until dawn, when Leryn's fangs finally managed to sink into the bear's throat, bringing it down. The pair stopped over their kill to admire their work, and it was only then that they realized they were no longer in the Blight.

It was by sheer chance that they found their way to Crystalhurst, a community of druids in the southern Fangwood. They stayed there for a while, regaining their strength and sharing what they had learned with the druids, who swore to put an end to the Blight. The druids thought that Adowyn might make a fine disciple for their order, but her bond to Leryn perplexed them, as it was stronger than any they had ever known. In the end, they excitedly concluded that the pair must be something new entirely, and were eager to study them. Yet while Adowyn learned a great deal in her short time there, Crystalhurst was not a place she meant to stay. Soon, she and Leryn set out once more, intent upon returning home to see Adowyn's mother and sister.

The young woman who returned to Crowstump was nothing like the girl that had left. The townsfolk kept their distance from her and the fierce wolf that padded along behind her. Returning to her home, she found only strangers. It seems that her mother and sister, heartbroken after the loss of Adowyn and her father, had left years ago to start a new life somewhere less troubled by painful memories.

In the years since that day, Adowyn has wandered the Inner Sea with Leryn at her side, working as bounty hunter. She's stalked a naga through the bleak wastes of Osirion, brought back a master thief from the sewers of Oppara, and even managed to recover the tail feathers of the elusive Jade Hawk without harming the reclusive bird. The only quarry she hasn't managed to track down is her own family, but that search never ends—one day, she'll be reunited with her loved ones.

Adowyn is never found without Leryn by her side. To others, she is quiet and brooding, but she can frequently be found having animated conversations with her wolf, as if he were responding in kind. She wears the armor and garb of the rangers of Nirmathas, a gift she was given after hunting down a patrol of Molthuni regulars that were stalking behind the lines terrorizing small villages. The bow she carries is her father's, a weapon she treats with reverence. In battle, Adowyn and Leryn single out their foes with grim determination.[1]