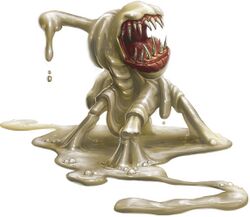 Mimics, or multispothol, are shapeshifters who get their name from their ability to mimic mundane objects, luring creatures into approaching them with their guard down.[1]

A mimic can have almost any dimensions, but usually is not more than 10 feet long. A typical mimic has a volume of 150 cubic feet (5 feet by 5 feet by 6 feet) and weighs about 900 pounds.[1]

Mimics are asexual, and reproduce via spores. When a mimic controls enough food and territory, it undergoes an involuntary internal change called spatter-spawning, laying out a large, thick glue-carpet of spore-rich protoplasm 30 or more feet in diameter. Having marked the walls and floor of a particular cavern or ruin with this stinking graffiti, it departs, never to return. Immature mimics bud out of the whitish glue-carpet, forming multi-hued, chitin-plated plasmoids the size of housecats; immediately ambulatory and capable of camouflage, these miniature mimics feed upon the glue-carpet, each other, and those helpless scavengers attracted by the stench and subsequently trapped by the glue.[2]