This article covers the family of aberrations. For the language, see Alghollthu (language). For the specific type of creature, see alghollthu master.

Alghollthus are a family of ancient, alien, largely aquatic creatures that have used their occult powers to manipulate and rule large portions of Golarion, both above and below the waves.[1] This included the human empire of Azlant, whose defiance of alghollthu rule resulted in the alghollthus summoning the meteor that caused Earthfall.[2]

According to both the Windsong Testaments and the alghollthus' own claims, they came into being before the first deities turned their attention to the Material Plane, and were among the first creatures to gain intelligence and develop their own civilization, although no record of this time has survived the intervening millennia.[3][4][5][6][7]

The first alghollthu awakened spontaneously in a pool of primordial soup on an unknown planet. Its first experience was to sense a cataclysm in the sky, which all alghollthus can remember in their cellular memory and agree to be the cause of the first alghollthu's awakening. The first alghollthu sensed myriad similar simple creatures around itself, but it was the only intelligent one. This is the source of the First Dictum of the alghollthus: life exists to be controlled.[7]

The first alghollthu realised that it was mortal and absorbed the nearby lifeforms, but this was not enough for survival. Eventually, instead of fully consuming a prey item, the alghollthu merely ended its life before allowing it to perform its normal functions for the alghollthu's benefit. Hence the alghollthus' Second Dictum: an alghollthu is to control.[7]

Eventually the alghollthus evolved and seeded their planet with multiple lifeforms, creating their first global empire. They ruled for millennia over the lesser creatures until something went wrong and their slaves rose up, catching the alghollthus unaware. The alghollthus resisted hard, but their former slaves were too numerous and tenacious, and the alghollthus were losing a war of attrition. Millions of rebels fell, but only a few thousand alghollthus survived, and they were forced to flee underground before they could be exterminated.[7]

The alghollthus chose among themselves the wisest and most powerful, who sacrificed themselves to merge into the first veiled masters, who were more intelligent and capable of leading them to their people's salvation. These veiled masters continued to study and master glyph magic; this took them 80 years, while the insurgents continued to push into their last territory, leaving fewer than a thousand alghollthu masters alive led by a few dozen veiled masters. The veiled masters spent over a decade creating two powerful glyphs and uttered the Final Dictum: to overreach is to threaten the eternal. The first glyph was then activated, creating a series of portals to other habitable worlds, through which all but one of the veiled masters went, each accompanied by a few score alghollthu masters, to build smaller colonies. When the first glyph expired and the rebels arrived to slaughter the alghollthus, the sole veiled master who stayed activated the second glyph, destroying the world.[7]

The alghollthus arrived on Golarion during the Age of Creation. They ruled the oceans, while the land was the domain of the xiomorns.[6] The two species came to war; the alghollthus eventually succeeded in driving their enemy from Golarion.[8] 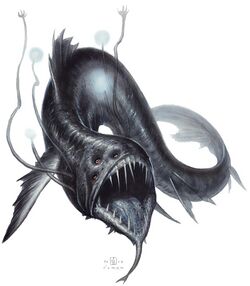 During the Age of Legend, the alghollthus began to experiment with humans, raising the Azlanti humans from barbarism, teaching them their control of magic.[4] The primary interactions between humans and alghollthus were handled by the veiled masters, who used illusion magic to disguise themselves and walk amongst humanity in the role of powerful wizards. As the alghollthus nurtured the Empire of Azlant, they also secretly spread their own power through its ascendancy. This marked the zenith of the second alghollthu empire.[9][7]

Eventually, the visionary named Xin discovered the secrets of glyph magic, and he was followed by other Azlanti who discovered the alghollthu manipulation. The alghollthus realised that they had to act but, this time, they used more subtle methods than those used back on their homeworld: omnipaths dominated agents to provide the alghollthus information; veiled masters in human guise sowed discord between Azlant and Thassilon; faceless stalkers assassinated leaders; and mimics wreaked havoc. None succeeded; in fact, these punishments only strengthened humanity's resolve to eclipse their teachers.[7][4]

Ultimately, alghollthu representatives from all worlds, the Mhalssthru, convened and authorised Earthfall on Golarion, which would devastate humanity and erase all traces of alghollthu involvement. For this, the Golarian speaker of the Mhalssthru was devolved into non-sentient single-celled organisms, and more than half of Golarion's alghollthus agreed to enter hibernation in the deepest oceans and caverns until given permission by the Mhalssthru to re-emerge. The alghollthus used master glyphs to reach out into the darkness of space and draw down a large meteor from the heavens, known as the Starstone, to obliterate the upstart humans.[4][6][9][7]

Humanity, however, was not without its protectors. When the Azlanti goddess Acavna learned of the alghollthus' plan, she pulled one of Golarion's moons from its orbit to intercept the massive meteorite. The Starstone impacted with the moon, but was not slowed or deflected from its course. Instead it shattered into millions of pieces, many of which pierced the goddess' manifestation, inflicting lethal wounds.[10] The Starstone continued on its trajectory and impacted with Golarion, completely obliterating the continent of Azlant and plunged the world into the Age of Darkness.[4][6][9]

To the alghollthus' great alarm, however, they had miscalculated the destructive power of the Starstone's impact. Not only did it destroy or severely cripple every major land-based civilization of the age, but also led to a severe downturn of the alghollthus' own advanced society on the ocean's floor, although most alghollthus survived, albeit asleep.[7][4] Alghollthus are known to have rescued a number of humans from the destruction of Azlant for their own reasons. Through their fleshwarping abilities, they were able to adapt them to the undersea environment, eventually creating the race known as the gillmen.[11]

As a family of creatures, there are several types of alghollthus, denoted here by their names in their native language:

Enisysian
A poorly known alghollthu sub-race bred as symbiotic slaves by a cabal of veiled masters known as the Fifth Dictum.[12]
Aboleth, or alghollthu master
The core type of alghollthu, who consider themselves masters not only of all other forms of life.[13]
Uldraaghu, or thalassic architect
Alghollthus that use telekinetic powers to manipulate physical matter.[14]
Plizeazoth
Large, bestial alghollthus that serve the role of tormentors.[15]

A vidileth, or veiled master.

Vidileth
The "veiled masters" of the alghollthus, capable of taking any form and wielding occult powers to control vast influence, even in modern times.[13]
Omnipath
The most powerful type of alghollthus that serve as organic thought networks.[16]

Ulat-Kini, or skum
The most common alghollthus were created from humans to serve as soldiers, but were abandoned when alghollthu influence waned.[1]
Ugothol, or faceless stalker
Shapeshifting infiltrators once manipulated by alghollthus, but now relegated to pursuing their original goals without guidance.[17]

Other forms of alghollthus, including some more powerful than vidileths, still exist in forgotten underwater cities, while creations of ancient alghollthus on the surface have since evolved into new horrors.[18]

Alghollthus ruled the watery expanses of the Darklands in ancient times, claiming the Sightless Sea miles beneath the Arcadian Ocean.[19] Although these underground cities largely were abandoned long ago, they are still known to dwell there in small numbers, as well as in the Darklands realm known as the Land of Black Blood.[20]

Ancient ruins of their cities, such as Voshgurvaghol in the Arcadian Ocean, are occasionally explored by the brave and foolhardy.[21]

Alghollthu society is strictly atheistic, as it is thought to have existed long before the gods took an interest in the Material Plane. To them the deities worshiped so fervently by the land-dwellers are nothing but young upstarts who came to plunder resources and conquer the Material Plane, unworthy of the alghollthus' attention. Though they recognise gods' power, they have no religious awe for them and believe that a sufficiently evolved alghollthu could easily rival them. The rare few alghollthus who seek easy power by worshipping a deity are relentlessly hunted and exterminated by their own kind, and organised cults could only exist in rogue enclaves.[22][23]

One of the most interesting parts of alghollthu society is their ability to mold and create new races of slave creatures to suit their needs. Many races of Golarion were originally created by the inscrutable alghollthus, including the skum (who made up the majority of their armies in ancient times),[24] cloakers,[25] faceless stalkers,[26] and ceratioidi.[27] As a result of this racial obsession with slavery and tyranny, alghollthus are violently opposed by prydanu azatas and often find themselves the focus of their zealous crusades of liberation.[28]

As a race, alghollthus clashed with elves when both were at the heights of their power on Golarion. The disaster of Earthfall forced most of the elves to retreat from Golarion and back to Sovyrian.[2] The Spiresworn elves and aquatic elves of modern Golarion continue to oppose alghollthu machinations from the Mordant Spire.[29]

Azlanti humans who sought aid from alghollthus during Earthfall became gillmen, a new race adapted to life underwater. They now work with Spireborn elves to recover underwater artifacts for them.[30]

Alghollthus have long been hindering and corrupting xiomorn experiments, either to co-opt them for their own schemes or turn the xiomorns' plans against themselves. Whatever the reason, their interference has turned them into one of the xiomorns' arch-enemies. Xiomorns have been discovered collecting alghollthu corpses and vice versa (even though neither species is otherwise known for taking trophies), suggesting both enmity and shared curiosity.[31]

Paizo published a major article about alghollthus, "Ecology of the Alghollthu", in The Lost Outpost.