Veiled masters are an alghollthu subspecies that rules over their family of species. Due to their mastery over magic and infiltration, they have walked among land-dwelling humanoids for millennia to observe and manipulate.[1] 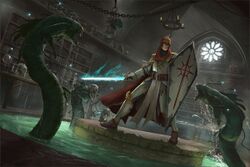 A paladin of Iomedae faces off against veiled masters.

Compared to alghollthu masters, veiled masters are both physically stronger and more adept at magic, having truly mastered glyph magic aeons ago. They can absorb other creatures' memories and flawlessly assume the forms of other species. An alghollthu master can transform into a veiled master by achieving the necessary magical enlightenment.[1]

When the alghollthus were still living on their original home planet, during the rebellion of their upstart creations, the first veiled masters were the result of the sacrifice of the wisest and most powerful alghollthu masters, who merged their biomass and consciousness into a new form capable of saving their race. These veiled masters continued to study and master glyph magic, which took them 80 years, while the insurgents continued to push into their last territory. Fewer than 1,000 alghollthu masters, led by a few dozen veiled masters, remained.[1]

The veiled masters spent over a decade creating two powerful glyphs, the first of which created a series of portals to other habitable worlds, through which all but one of the veiled masters went to build smaller colonies, each accompanied by a few scores of alghollthu masters. When the first glyph expired and the rebels arrived to slaughter the alghollthus, the sole veiled master who stayed activated the second glyph, destroying the world.[1]

The alghollthus first arrived on Golarion in the Age of Creation, coming into conflict with, and eventually triumphing over, the xiomorns. During the Age of Legend, veiled masters were responsible for raising the humans of Azlant from barbarism to the first great human empire on Golarion. In truth, the Azlanti were all puppets: the veiled masters disguised themselves as powerful wizards to watch and interact with their playthings, and when they wanted a change, it was a simple matter.[1][2]

For most of Azlant's history, veiled master was the term used by conspiracy theorists to refer an anonymous council that was thought to hide in the government and manipulate Azlant's sociopolitics as a means to control it; when an Azlanti would suffer a misfortune, the 'veiled masters' were usually blamed. Most people gave these so-called conspiracy theorists little heed, finding it absurd that a small cabal could manage to absolutely control millions of citizens without someone whistleblowing. Those who spoke openly of the 'veiled masters' were ostracised, their works pushed to the fringe of respectable society, although historians did note evidence of veiled masters in the most ancient Azlanti folklore. Rumour had it that the veiled masters were not as human as they seemed, but any who suspected the truth were murdered or brainwashed by the veiled masters.[3][4][5]

Eventually, the visionary named Xin discovered the secrets of glyph magic, and he was followed by other Azlanti who discovered the alghollthu manipulation. When the truth became widely known among Azlant's elite—the veiled masters were real, and had been manipulating them for millennia—the alghollthus responded by calling down Earthfall to destroy Azlant. As Azlant sank, the veiled masters retreated deep into the sea, having made an example of their upstart pawns. Today, they continue to walk among Golarion's humanoids.[1][4]

Like their lesser cousins, veiled masters typically make their lairs in deep caverns or the dark depths of the ocean. They can also be found masquerading as humanoids on the surface, sometimes for centuries at a time.[1]

Although they are not the most powerful alghollthu subrace (that title goes to the omnipaths), veiled masters more or less rule over their race unopposed. Veiled masters on different planets have little contact with other enclaves, and each selects a single representative among the Mhalssthru, a congress that guides alghollthus' future by regulating the alghollthus' evolution and genetic tampering of other species, ensuring that their race remains hidden, and watching for potential threats. The most recent Mhalssthru meeting happened near the end of the Age of Legend, to authorise Earthfall on Golarion. It is possible that some alghollthu enclaves have lost their veiled masters, and with it, their connection to the Mhalssthru.[1]

Veiled masters usually infiltrate a targeted society under common disguises, then use magic and coercion to reach advisory positions to powerful figures, where they can exert great influence without facing much scrutiny. In these positions, a veiled master can directly manipulate decision makers and instate loyal puppet leaders. Those who discover the truth are killed and replaced with a shape-shifting faceless stalker.[3]

Although all veiled masters coordinate their efforts in order to benefit their whole race, they do not always agree on the idea of what is beneficial for the alghollthus and in which way. Clashing between veiled masters is thus less common than in humanoids, but still occurs, especially when interpreting history or plotting long-term plans. Veiled masters that are ostensibly working together on the same delicate plan might also secretly maintain their own individual agendas that deviate slightly from each other.[3]

While the existence of veiled masters is little-known in the Inner Sea region, in the last decade alone, crackpot conspiracy theorists have hypothesised that Khemet III, Mengkare, Gyr of House Gixx, at least three members of the Decemvirate, numerous high-ranking Kalistocrats, Razmir, and even Aroden were veiled masters. They point to Aroden's raising of the Starstone as evidence for him being the greatest veiled master, and Absalom being nothing more than a New Azlant. None of these 'theories' holds any merit; for their part, veiled masters are unwilling to steal the identity of such widely-scrutinised public figures.[2][3]

A veiled master assuming the identity of popular Macinian figure Aylana Cantesslu was discovered controlling the Chelish city's economy about 300 years ago. The adventurers who discovered this scheme also found evidence of other veiled masters across the Inner Sea region, but these figures subsequently disappeared. For a time, many members of Cheliax's government were accused of being disguised veiled masters at least once.[2][6]

The following four veiled masters are currently active on Golarion, although their presence is not yet known by the wider public: [7]

Paizo published two major articles about alghollthu masters and veiled masters: "Ecology of the Alghollthu", in The Lost Outpost; and "Plots of the Veiled Masters", in Beyond the Veiled Past.