It is a sorry lot for a proud dwarven daughter to be raised a miserable dwarven son, but everyone receives one lot in life, and Shardra Geltl never knew to expect better. Childhood was kind, her sisters loved her, her brother protected her, and always she had the whispers of tools and books to keep her company. Adolescence, though, came bearing heavy burdens. Her siblings moved on with their own lives, replaced by harsh teachers and taskmasters. She weathered a staggeringly awkward first kiss as her childhood best friend grew into a handsome lad, followed by a painful arranged engagement to a lovely girl from the neighboring Dechl clan. But the mines and refinery of Xolgrit fed the war machine of Rolgrimmdur far above, and militant efficiency demanded all citizen-soldiers accept and excel in their roles, no matter how miserable.

But Shardra still had the whispers to keep her company on lonely nights.

Books quipped bits and pieces of their tales, bowls jabbered gossip shared over breakfast, and picks stammered the poems of the rocks they clove. And while the odds and ends of Xolgrit kept her company, the stones of the Old Road, carved long ago by dwarves still hunting for the sky, sang legends. More and more often, the shy dwarf slipped away to wander the crumbling paths, learning the deeds of her ancestors away from the clamor of duty and expectation. She assumed the whispers were her friends, there to keep her safe and offer respite from the dull ache of life. Then one "trustworthy" stone crumbled beneath her feet, dropping her into darkness.

The fall was short. Her arm met stone with a wet crunch, but the ache from the shattered bone faded away as the whispers rose in deafening song. All around stretched an ancient cavern. Hot springs bubbled across its floor, while mosaics and beaten gold masks decorated the walls. Mundane beasts and fantastic creatures wandered past, unperturbed by her presence.

A single tuatara waddled forward as she cradled her limb. It borrowed a tongue from the whispers and spoke. "What are you?"

"I—" She opened her mouth to speak, borrowing too from those old, quiet chants. And although the whispers had a word for all things in creation, they had no words for the expectations of others. "I don't know."

From that day on, the whispers poured themselves through Shardra's reptilian friend, speaking louder and more clearly with a mouth to form the words. She soon named the creature Kolo—an old Dwarven word for the beauty in everyday things—and told Kolo of Xolgrit and Rolgrimmdur, and of the beauty of the stars in the night sky, and how to tell past and present and future apart. And Kolo taught her how to speak to spirits and borrow their favor to mend her broken bones, and of dwarven faith from long before they mingled their worship with the deities of the surface world. It taught her how to glean deeper secrets from the artifacts of the dead, and how to greet the Ladies of Crag and Ember—powerful elementals who laid claim to the hot springs and the surrounding tunnels. Most precious of all, Kolo taught her of the rivethun—dwarves who drew great power by embracing the disjunction between their bodies and souls—and she learned to brew the alchemical tinctures her past sisters used to quiet the rages of adolescence and bring their minds and bodies into harmony.

As Shardra's mystical skills and budding femininity began to show, her parents lamented their loss of a son and the addition of yet another dowry. Their irritation changed to joy as their daughter's dealings with the spirit world guided Xolgrit's miners to rich new veins of ore and long-lost treasure troves. The Geltl clan's fortunes reversed as Shardra's confidence, skills, and womanhood blossomed, and eventually clans from Xolgrit and beyond offered handsome brideprices. 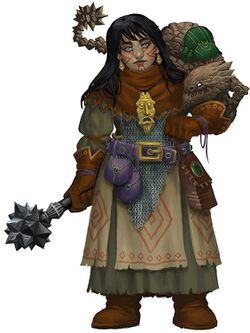 Shardra's gifts attracted more than suitors, however. Lonely spirits and treasure hunters alike came to Xolgrit hoping to profit by the young shaman's insight. Neither settled peacefully into the community's rigid order. The string of looting, possessions, drunken brawls, hauntings, and soured beer drew the attention of Rolgrimmdur, and the city-state dispatched a squad of soldiers—under the command of Captain Itcel Dechl—to put down the ragtag mercenary gangs squatting in town. Shardra herself turned her magic on its source, driving the spirit invaders back to the hot spring and demanding the Ladies of Crag and Ember keep their subjects under control.

Unsatisfied by her easy victory over a band of drunken thugs and grave robbers, Captain Dechl and her soldiers traced Shardra's path through the Old Roads, and eventually claimed the sacred shrine (and the wealth covering its walls) as a cultural treasure for Rolgrimmdur. The elemental Ladies raged at the presumption, swearing in turn to reduce Xolgrit to rubble. Both sides declared the dwarf maiden a traitor and cast her aside as they charged into battle. Shardra lashed out, seizing control of an earth elemental and using its might to collapse the ancient shrine.

With nothing left to fight over, the opposing armies fled.

Lacking any evidence of Shardra's actions but burning with frustration, Dechl used what remained of her authority to accuse the spirit-talker of heresy. Although friends and family staunchly defended her innocence, Shardra took the allegations as a chance to act on plans that had grown increasingly tempting. She left Xolgrit and her tutors, childhood friends, and family by paths only the stones remembered. Shardra reached the surface a guarded but curious woman, more interested in stories of the long dead than the bickering of the living. With Kolo the crag tuatara at her shoulder, Shardra now wanders the world, uncovering lost treasure and listening to the tales it has to tell. Permanent ties still chafe, even ones as shallow as a favor owed or an unpaid tavern bill, but her heart softens toward any who wander. Despite her love of the world's vast mysteries, a small part of the shaman yearns for the joy and companionship she once felt with her sisters, and Shardra corresponds with her family often, ever watchful for any discovery that might provide an excuse to write or visit her distant, glittering home.[1]

Kolo is a crag tuatara who found the shaman Shardra Geltl in a cavern near Xolgrit. Spirits speak to Shardra through the reptile, whom Shardra named after the dwarven word for beauty in everyday things. After Shardra left Xolgrit, Kolo accompanied her as her spirit animal.[1]