Plodding creatures comprised of rock, earth, or crystal, earth elementals are strong but slow creatures native to the Elemental Plane of Earth. 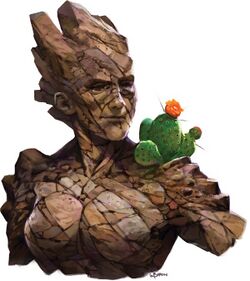 Earth elementals are creatures made of the very substance of the Plane of Earth, and can be comprised of solid stone, shimmering crystal, or plain dirt. The only universal feature of earth elementals is their eyes, which are always made of some variety of beautiful and often at least semi-precious gemstone. Like other elementals they come in a variety of forms often imitating Material Plane life forms. Some look like a primitive, barely carved statue of whatever creature's form they have taken. Interestingly, the larger elementals almost universally take a humanoid form.[1]

Earth elementals live on the Elemental Plane of Earth, which they share with the shaitan genies, the powerful crystal dragons, and a host of other elemental creatures. Little is known of what the earth elementals actually get up to on their home plane; unlike most of the plane's other inhabitants, they avoid the labyrinthine cavern system that winds throughout the plane, instead sticking to the deep earth. The only time they really interact with the plane's other inhabitants is when the shaitan or others wish to mine out a valuable vein of ore or crystal in which the elementals live, and such encounters rarely end peacefully.[2] When earth elementals do end up on the Material Plane, usually through some mage's summons, they tend to congregate in the very depths of the earth and are and so are more likely to be encountered in the Darklands than on the surface of Golarion.[1]