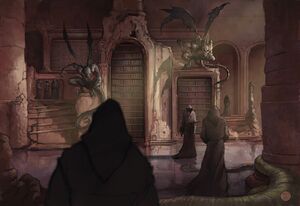 Stygia, the fifth layer of Hell.

Every lie spoken throughout the planes condenses as a drop of poison to flood Stygia (pronounced STIJ-ee-uh),[1] the fifth layer of Hell. It is ruled by the archdevil known as the Source of Lies, Geryon. Amid the tangled swamps and fetid jungles rise moldy ruins, mired temples to false deities, and whole blasphemous cities. The waters of the Styx mix with the layer's venomous bogs, creating vast noxious moors before flowing into vast black seas. Dilapidated avenues paved with cracked stones—remnants of empires that never were—cut through these dense bogs, though they regularly succumb to unexpected floods of stagnant water. Travelers who brave the paths or manage to fight their way through the swamps for long enough inevitably discover examples of the layer's countless ruins, overgrown temples and cathedrals, disparate crumbling monuments, and fortresses upturned as if flung by gigantic and careless hands. Most of these decrepit structures—drawn in their entirety from innumerable mortal worlds—still bear artifacts and artistry from forgotten epochs, typically idols and icons of deities and divine forces unknown to even the longest-lived inhabitants of the multiverse.[2][3]

Osyluths are created in the foul depths of Stygia, chosen from the most manipulative of the erinyes and forced under the vile slime for centuries before arising as a bone devil.[4]

There are substantial populations of asuras and asura ranas.[5]

Stygia is home to more non-devils than any other layer of Hell.[5]

Ayngavhauls can commonly be found near one of Stygia's infernal collections of knowledge, such as an Academy of Lies.[6]