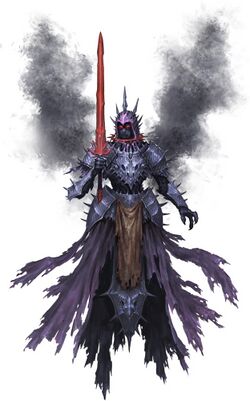 Archdevil Baalzebul, Lord of the Seventh.

The frozen realm of Cocytus (pronounced koh-KY-tus)[1] is Hell's seventh layer, the domain of Archdevil Baalzebul.[2][3]

Cocytus is a realm of frozen oceans and razored glaciers.[4] No true land exists in the seventh layer of Hell; the entirety of Cocytus is comprised of a black, icy ocean on which float glaciers the size of continents. Volcanoes occasionally rise from Cocytus' mountains of ice; some produce heated lava, which provide oases of heat amidst the deadly cold of the layers, and others instead contain intensely cold liquids capable of freezing anything they touch.[5]

Cocytus's weather is harsh and deadly. Its temperatures often plunge low enough to freeze flesh and render adamantine brittle. Blizzards of razor-sharp ice crystals often sweep across the glaciers, and the winds can blow with enough strength to pull giants into the sky.[5]

The petitioners sent to Cocytus are those who betrayed others or were destructively ambitious in life. Their punishment is to be frozen into the solid ice of the glaciers.[5]

Accuser devils are created within the foul cesspits of this frozen layer, shaped and formed by the mad whim of Baalzebul.[6] Platoons of cornugons are also sent here by Moloch to continue their training to become malebranche. Gelugons also live here, lairing and scheming in remote hermitages.[5]

The oceans beneath Cocytus' floating glaciers are home to leviathans of gigantic size. These creatures are rarely seen and known mostly from legend, but signs such as crests that shatter entire cities or giant eyes beneath the ice are recorded every few centuries.[5]