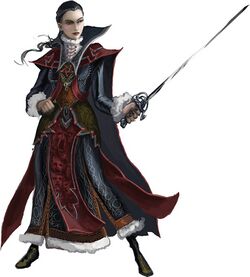 The Chelaxian (pronounced che-LAX-ee-en)[1] people have spread from their origins along the coast of the Inner Sea across much of Avistan and Garund. They are the true legacy of the once great Empire of Cheliax, whose lands once encompassed kingdoms as numerous and varied as Andoran, Galt, Molthune, Nirmathas, Sargava, and parts of Varisia. While the Cheliax may have shrunk since its golden days, the Chelaxian people live on, still inhabiting all of their former territories and beyond.[2]

The Chelaxian people come from the merging of two different people: the ancient Azlanti, whose blood they proudly claim, still runs strongest in modern Chelaxians, and the northern Ulfen. They tend towards dark eyes, dark hair and pale skin. Their pale skin is the main difference between Chelaxians and their Taldan rivals, who also claim descent from the ancient Azlanti.[2]

Chelaxians who can afford it favour rich clothes that allow them to show off their wealth and stature, but that rarely become as opulent and gaudy as the fashions of Taldor.[2] In colder Avistan, velvet or silk gowns or doublets are popular, often lined with brocades or trimmed with lace. In places where protection is paramount, armor is inscribed or etched and weapons are filigreed. Those with more modest means, or who wish to blend in with the general populace dress down to suite the circumstances, but never disguise their confidence and bearing.[3]

The Chelaxian people once boasted one of the largest empire in modern Golarion. It arose as Taldor's empire waned, and was founded without the usual violent political upheaval that has marked the birth of countless nations (see Even-Tongued Conquest).[4] Although their country originally encompassed the southwestern-most corner of Avistan, they soon expanded their lands via a series of wars of conquest known as the Everwar. At its height, Imperial Cheliax held sway over the lands of Andoran, Galt, Molthune, Nirmathas, as well as distant Sargava and Varisia, but their influence extended north as far as the Lands of the Linnorm Kings and as far south as the Napsune Mountains in Garund. Their power was such, that they were able to move the center of Aroden's worship from Taldor to Cheliax.[4] The empire was eventually shattered during the upheavals that followed the death of Aroden and the rise of diabolism in Cheliax, thanks to House Thrune. The breakup of the empire of Cheliax has robbed the Chelaxian people of their shared heritage. Now half a dozen separate nations strive to create their own future, some still under the influence of infernal Cheliax, others as newly independent nations.[5] 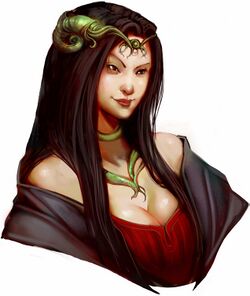 The Chelaxians as a people are often renowned for their more negative traits and are thought of as arrogant, ruthless, and ambitious. There are positive traits generally associated with Chelaxians as well, including being organised, intelligent, and cultured, and having a great love of learning, be it theological, scientific, or magical. They are often of the opinion that they are more qualified than any other race to handle a problem, a character trait which makes them doggedly determined despite overwhelming odds, but which also strikes others as presumptuous and self-aggrandizing.[2][6]

Most Chelaxians speak Taldane, also known as Common, a language which they share with much of central and southern Avistan. It is unknown what language the native peoples of Cheliax spoke before Taldor founded its colony there in 3007 AR.[7][3] Chelaxians in Cheliax also speak the Infernal language of their diabolic patrons.[8]

Like many other peoples, Chelaxians generally have a first name followed by a surname or family name. Family traditions are quite important, especially when someone is descended from a well-known historical figure. Names are often also quite important-sounding, and many upper-class Chelaxians insist that their full names be used when addressing them. Sobriquets or pseudonyms are common among those who have achieved renown.[3] Chelaxians who claim a strong Azlanti bloodline sometimes comb through ancient texts and pick what they believe to be Azlanti names in order to strengthen their connection to their supposed heritage.[9]

Chelaxians are inherently a lawful people who take great care and pride in following the rules set out by the community. On the other hand, they also often look for a loophole or exception in the rules, anything that might give them an advantage over a competitor. They take orders easily (as long as they come from a legitimate or respected source) and are quite skilled at working in a team for the greater good.[3] 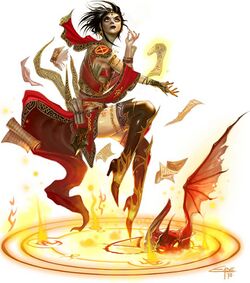 Although diabolism and most-importantly, the worship of Asmodeus is the state religion of Cheliax, those Chelaxians living abroad can be found venerating a wider range of deities; the most popular are Abadar, Erastil, Iomedae, and Zon-Kuthon.[3]

Heroes are popular in Chelish culture, especially those who personify the core values of strength, nobility, ambition, and most importantly, success. They are rewarded with lands, titles, and opportune marriages into the nobility, but only as long as they are not seen as a threat to the government or ruling class. Heroes who fall out of favor with the authorities are often sent on near-impossible quests to foreign lands, or else disappear quietly in the night.[3]