Arcadian is a generic name for the native humans of Arcadia, a massive continent that is home to hundreds of unique cultures and ethnicities.[1]

Few of the many ethnic and cultural groups of Arcadia are known to visitors from the Inner Sea region (and fewer still in those travelers' homelands).

The Ulfen settlers who were the first recorded Avistani humans to encounter people on Arcadia gave them the derogatory nickname "skraelings",[2] but the people were known in Arcadia as the Kansari. The Kansari were originally hostile to the colonists of Valenhall, attacking with arrows and tomahawks, until unknown Ulfen diseases thinned their ranks. Today, the Kansari and nearby Mahwek live in uneasy balance with the Ulfen and other Avistani settlers.[3][1][4] 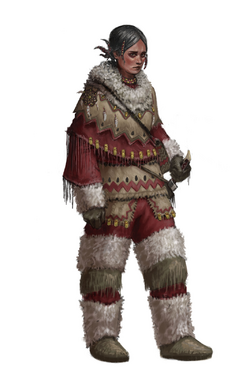 The Mahwek people dominate northeastern Arcadia, and are the most populous and well-known Arcadian ethnicity to the continent's Avistani settlers.[1][4] The nation of Degasi is mostly comprised of Mahwek, as are three other nations that join it in a trade coalition that protects and regulates the Avistani colonies.[4]

Few Arcadians are known to have traveled to the Inner Sea region, though inhabitants of the Degasi city of Segada believe some might have secretly settled Avistani communities.[1]