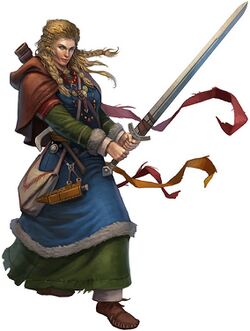 The Ulfen (pronounced OOL-fen)[1] are a human ethnicity once feared along Avistan's coastlines for the fierce and merciless raiding they conducted in their longboats. They are sometimes referred to as Vikings[2], though this may more specifically be applied to Ulfen fighters and warriors.[3] The days of raiding have passed, but the Ulfen are still renowned for their height, blonde hair, and their prowess as warriors. Ulfen bodyguards are highly desired throughout the courts of the Inner Sea region.[4]

The Ulfen normally boast physiques larger than the average human with men standing no less than six feet on average, and women just a few inches shorter. They have pale skin and their hair is usually either blonde, straw brown, or red, and is often worn in a braid by both men and women, although women's braids tend to be more elaborate. Men also frequently wear beards. Their clothing is tailored for their cold environment, with fur being a commonly used material. They decorate their clothes with jewellery shaped like a braid made out of horn, ivory, bronze or silver. Necklaces are also often worn made of narwhal horn, mammoth ivory, or amber.[5][4]

Before becoming infamous raiders, Ulfen were best known as mighty explorers and colonists. King Ulvass of Kalsgard founded the colony of Valenhall in distant Arcadia in -473 AR.[6][7][8] It has since become the final destination for the lords of the Lands of the Linnorm Kings, who attempt the lengthy and dangerous journey to the colony at the end of their lives, and see Valenhall as a spiritual destination for the bravest of warriors.[7]

During the 700s AR, Ulfen explorers from Avistan migrated east along the southern edges of the Crown of the World into the continent of Casmaron and founded the nation of Iobaria. They traveled east from the Lake of Mists and Veils until they reached the Castrovin Sea. There they spread out and attempted to subdue their new, hostile environment.[9] Okormirr was the first Ulfen settlement east of the Lake, and was founded around 752 AR. Okormirr then spawned the city of Orlov, which eclipsed its predecessor in 764 AR. In 905 AR, the ruler Iobar the Potent of Orlov succeeded in uniting the Ulfen of Iobaria into a single realm.[10]

The Ulfen people have been renowned for their abilities as raiders, and many people living along the western coast of Avistan carry a little Ulfen blood in them. Ulfen raiders began raiding even as far south as the western coast of Garund as early as 1218 AR,[11] and heavily raided the western coast of Cheliax in 1975 AR.[12] Experienced Ulfen raiders often earn nicknames based on their skillsets or feats they have performed during raids. The names often include names of the animals that are prone to the Lands of the Linnorm Kings, and is seen as an homage to the land the Ulfen derive from, but also as a sign of respect to Gozreh. Most raiders pray or make small sacrifices to Gozreh during raids to ensure safe travel and calm seas.[citation needed]

There was a time when all the Ulfen people were part of the same nation, the Lands of the Linnorm Kings. Fourteen hundred years ago, the Lands of the Linnorm Kings stretched from the Steaming Sea all the way to the borders of the Realm of the Mammoth Lords. In 3313 AR, the witch-queen Baba Yaga invaded from the north with her army of blue-skinned ice trolls and cold fey in an event known as the Winter War. Within a month she had carved a sizable territory out the eastern Linnorm Kingdoms and renamed it Irrisen.[13][14]

In 4704 AR, the Linnorm King White Estrid managed to smash through a Chelish blockade at the Arch of Aroden to sail victorious into the harbour of Absalom, displaying that same daring Ulfen spirit.[15] 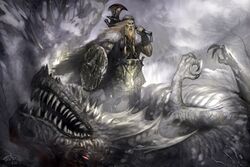 Ulfen culture puts a high value on appearance despite the Ulfen reputation for savagery. They carefully braid their hair, or else have long, flowing locks, and dress themselves in the best furs they can afford (generally ermine, mink, or fox.[4] The Ulfen of the Lands of the Linnorm Kings are sailors, traders, and occasionally raiders, while those still living in Irrisen are raiders. Most have a sense of adventure, as the frozen lands of the north do not generally foster the timid.[5]

The role an Ulfen is expected to fill depends on his or her gender, though the majority of Ulfen are farmers, trappers, fishermen, or labourers. Male Ulfen are most likely to become rangers or priests of deities like Torag, Erastil, or Gorum. Druids of Desna are also common. Women are often priestesses of Desna or Torag. A small amount of women also become Wind Sisters, Ulfen maidens who have tamed an aerial mount and use it to fly from isolated settlement to isolated settlement. They also form the first line of defense against aerial threats.[5][4]

Most Ulfen speak Taldane as well as their own language, Skald, a lilting tongue full of long, complex words.[16][4] Common female names include Gunda, Hege, Ingrit, and Signe, while common male names are Dines, Ostog, Svalk, and Tallak.[4]

Ulfen men love competition, both those of the athletic variety as well as those that involve the consumption of alcoholic beverages. Athletic competitions are most often held at the start of winter or the beginning of spring, and can involve climbing ice walls, throwing pieces of timber, pulling sleds, throwing axes, or running on foot or in snowshoes. Rowing or sailing competitions are also popular, although swimming is not. Drinking competitions generally involve boasting about who can drink the most or the quickest. Visitors who witness these drinking contests have given Ulfen men the reputation for being boorish louts, which is not altogether undeserved. These drinking contests only happen during special feasts, however, and any men who engage in them outside of these festivals are roundly mocked and ridiculed.[4]

Personal honor and sworn oaths are greatly valued by the average Ulfen, and duels are a popular pastime. These are generally practiced with axe and shield, where the contestants fight in a close circle and attempt to either break the opponent's shield, push them out of the circle or even kill their opponent. While duels often are quickly forgotten, feuds, on the other hand, are much more serious and can arise over matters as trivial as how best to mend nets or fishing rights over a lucrative salmon spawning territory. Feuds generally involve whole families or even clans, and can also involve cattle raiding.[4]

Ulfen traditionally keep thralls, slaves who serve them for a set amount of time, after which they are set free. Thralls are generally captured in battle or condemned to their service after committing a crime by a special court known as a thingmar. No Ulfen, not even chiefs or jarls, are immune from this punishment given a serious-enough crime such as killing a child, betraying fellow warriors, or breaking an oath. Children born to thralls are always free, and thralls may file complaints against cruel or unfair treatment by their masters. This is generally done very cautiously, however, as it brings great shame to the master and often invites retribution.[4]

Unlike most other cultures, Ulfen don't consider the curse of lycanthropy to be especially dishonorable, and believe it is a blessing by the nature spirits. During periods of the full moon, those who suffer from the curse are locked in special longhouses or spirit houses, which are barred with silver and stocked with enough food to satiate the afflicted person's ravenous appetites.[4]

Ulfen are most commonly encountered in the Inner Sea region in their homeland known as the Lands of the Linnorm Kings. Smaller populations can also be found in Varisia and in the distant Arcadian colony of Valenhall.[4][7] The peasant population of Irrisen is composed primarily of Ulfen humans descended from those who lived there when Baba Yaga conquered their land, although there is little cultural resemblance between them and their western kin any more.[17]

In addition to their direct presence in other areas of the world, the Ulfen's history of colonization and exploration has resulted in the presence of Ulfen blood in many peoples throughout Golarion. The Horsemen of the Velashu Uplands of Varisia are descended primarily from Ulfen settlers and Varisian natives of the area, alongside a less prevalent Shoanti influence.[18] The Iobarian people are likewise descended from ancient Ulfen explorers.[19]

The Ulfen Guard is a notable organization of Ulfen warriors based in Taldor, where they are charged with ensuring the safety of the nation's Grand Prince. The Ulfen Guard was originally funded in response to the assassination of Grand Prince Jalrune in 3129 AR, and have served dutifully ever since.[20]