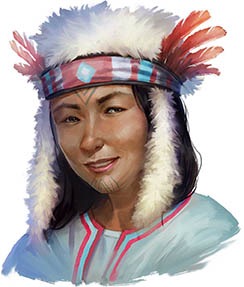 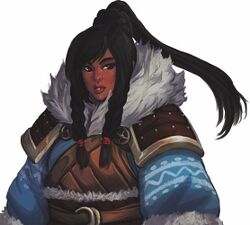 Svala Ice-Rider is a Pathfinder of Varki descent.

The Varki are a human ethnic group who inhabit the extreme north of Avistan, primarily the region of the Lands of the Linnorm Kings known as Icemark. These semi-nomadic fishers, furriers, and reindeer herders are believed to be descended from Erutaki who migrated south from the Crown of the World, Varisians who migrated northward, and exiled Tian.[1][2] Many are druids, hunters, rangers, and shamans to complement their strong links to nature.[2]

Semi-nomadic, the Varki travel frequently, with each tribe avoiding the other in order to share the resources of the region fairly.[1][2] Although each tribe has their own customs and social beliefs, marriage between the tribes is common in order to prevent in-breeding and to allow individuals to select a tribe more accepting of their personal beliefs and inclinations. Universally, however, the Varki believe that with age comes wisdom and power, and thus the elders are respected above all. Furthermore, they are a conservative people, with new ideas (especially from outsiders) being frowned upon. The Varki diet consists mostly of meat, either from aurochs or caribou. Some limited farming does occur despite the harsh environment, but the food produced is a treat rather than a staple part of their diet. Scrimshaw, leather, furs, and meat are the primary trade goods from the Varki people.[1]

As a part of a Varki child's coming-of-age they travel to the dangerous Iceworm Hills and band together to hunt one of the ferocious beasts that dwell there. The Iceworm Hills are home to both remorhazes and frost worms, though the young Varki only hunt remorhazes since frost worms explode when killed. Once they have killed a remorhaz, the young hunters harvest its teeth and spines to make them into renowned Varki scrimshaw.[3] 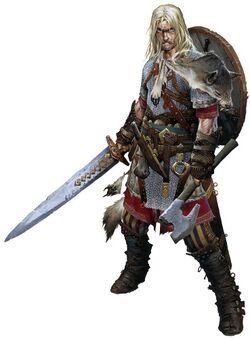 Relationships with other groups

For many years the Varki did not recognize any of the Linnorm Kings, instead following the reindeer (caribou) herds across the northern plains, sometimes even as far east as Irrisen and the Realm of the Mammoth Lords.[4] As a decline in the caribou herds forced Varki tribes to engage in more trade and contact with their Ulfen neighbors than they had ever had before, tensions arose between several Varki tribes and their Ulfen neighbors. Ultimately, the Varki hunter Nankou resolved these tensions by slaying a linnorm and claiming the title of Linnorm King of Icemark. The Ulfen were somewhat confused by Nankou's claim, but also impressed by the Varki's feat. Nankou's kingship is somewhat half-hearted, as he primarily uses his title only for settling trade disputes. Rather than make a true attempt to exert his authority, he spends most of his time in Icemark's wilderness hunting.[1][5]