Variously known as elder things or old ones (not to be confused with the Great Old Ones), these bizarre, but highly intelligent, creatures travel the void between the stars.[1] 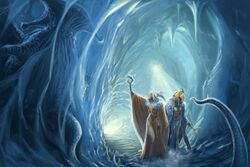 An elder thing buried in ice.

An elder thing has a barrel-shaped body, with ridges running from one end to the other. Its head is shaped like a starfish whose arms end in eyes, with stalked feeding tubes and a mouth at the centre. At the other end of its body are five large tentacles and numerous smaller ones, which serve as legs on land. An elder thing has five sets of wings and five branch-like arms ending in prehensile 'fingers' capable of manipulating weapons and magic items manufactured for humanoids (although they obviously cannot wear humanoid clothing). All of an elder thing's limbs can be retracted if needed. A typical elder thing is six feet long, has a seven-foot wingspan and weighs around 450 pounds.[1]

Despite their weight, elder things can fly, albeit clumsily. Their thick, syrupy, green blood has a nauseating odour, that is repulsive to many animals, especially dogs.[1]

Elder things possess both lungs and gills. When needed, they can shut themselves down completely when there is nothing they can do. Elder things are highly intelligent and advanced in both technology and magic. Their language, also called Elder Thing, consists of piping sounds and shrill cries that the human mouth has difficulty learning, and is written with a script incorporating radial markings.[1]

Elder things are comfortable in most environments of the Material Plane, from land, water, to even the vacuum of space. Due to their ability to travel between the stars, they have seeded life on countless planets, preferably those with no native life. Since it takes aeons to do so, elder thing colonies rarely leave their new planet, only sending out new colonists when truly necessary. Sometimes, elder things that live too long on a planet can no longer survive in space, becoming stranded on their home.[1]

Despite their inhuman shape, elder things have very human-like drives: a curiosity about the nature of life, the creation of lasting works of art, and boundless capacity for war, and egotism. Elder things view the creation of new life as an art, and are said to be the source of entire ecosystems. They often come into conflict with creatures like mi-go and star-spawn of Cthulhu over planets. In battle, they rarely use melee weapons and prefer natural weapons or magic items.[1]

Elder things are the creators of the shoggoths, which they breed as versatile, strong builders of the cities they live in. However, countless elder thing colonies have fallen to uprisings led by shoggoths who developed intelligence, yet their hubris causes most elder things to consider such errors to be failures of lesser minds that they can never commit.[1]

In Golarion's solar system, they are most commonly found hibernating beneath the ice of Akiton's southern pole, but have been spotted on the other planets as well.[3]

Original source: H. P. Lovecraft, At the Mountains of Madness, 1931