The legendary neothelids are foul and powerful creatures. Despite their worm-like appearance, they are intelligent and cunning.[1] 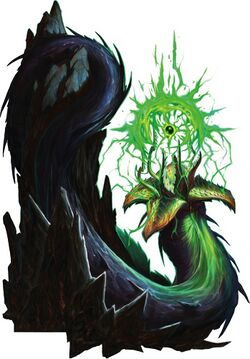 A neothelid is a massive, slime-drenched worm with four barbed tongues. Their hide is incredibly tough, and their gaping maws can easily swallow smaller creatures.[1]

The first neothelids were spawned by the Outer God Shub-Niggurath, who released millions of them into the surface of Golarion during the Age of Creation. The neothelids burrowed into the Darklands, and during their first tens of thousands of years of existence, when the Darklands were still very sparsely populated, they hunted and consumed their own kind for sport. When other races like alghollthus, xiomorns and intellect devourers arrived, they immediately came into conflict with the neothelids. Their once mighty subterranean empire was overwhelmed by the neighbouring races which bred much faster.[1]

Threatened with extinction, the neothelids started to care about the survival of their race, retreated to their nests, stopped hunting other neothelids, and began to reproduce.[2] During this period, they were attacked by the intellect devourers of Ilvarandin, but successfully repulsed the invaders.[3]

Neothelids are physically impressive foes. They can exhale a cone of acid capable of reducing a group of powerful warriors to a steaming ruin. A neothelid's barbed tongues inflict grievous wounds, and can also drag prey into the creature's hungry maw.[1]

They are also surprisingly mobile, using their psionic abilities to fly without wings and to teleport around the battlefield at will.[1] However, despite their worm-like forms they have no ability to burrow, though repeated use of their acid breath weapon can gradually melt new tunnels.[2] Their lack of hands does not impede them, as they can readily move objects using the power of their minds alone. They can also communicate telepathically.[1]

Those who decide to escape a neothelid by teleporting away may find to their cost that the creature has a strange ability to gain an inkling of the intended location of the teleport. The neothelid can sometimes use this knowledge to pursue its foes by using its own teleport ability.[1]

Their hide resists blows unless cold iron weapons are used, and they can often shrug off the effect of spells against them unless the caster is particularly powerful.[1]

They can also overwhelm the minds of foes (sometimes with fatal effect), and influence the actions of the weak willed.[1]

Neothelids are far less fecund than their mother Shub-Niggurath, from whom they originally spawned by the millions. A neothelid egg takes from two to three centuries to hatch, during which time the young is very frail and vulnerable. Neothelid hatchlings are still weak and take centuries to mature. In contrast, a neothelid can produce hundreds of seugathi offspring per month, and can amass an army within a few decades. Neothelids are biologically immortal.[2]

Discounting their seugathi servants, neothelids usually live alone, and rarely gather in small groups which never number more than half a dozen, since they find it difficult to forget the ecstasy of cannibalism. The exceptions to this are the sprawling cities under the control of a neothelid overlord, who rules in relative peace and stamps out rivalries.[2][1]

Neothelids see their seugathi offspring as no more than servants, and amuse themselves idly by watching the battle between seugathi larvae. They keep the strongest seugathi to guard themselves and send the others on missions. Sometimes, neothelids give their children an impossible task to trigger an awakening that turns them into seugathi savants.[2]

As the seugathi speak on their behalf, neothelids rarely directly interact with other species. In exceptional cases, a neothelid might approve of a request of an audience, but their mental abilities are strong and their patience limited, so creatures that think themselves worthy of speaking to a neothelid usually end up dominated or killed. Purple worms are an exception to this: neothelids see them as distant relatives, and find them both easily controllable and useful to expand or renovate their lairs.[2]

Most neothelids venerate their mother Shub-Niggurath and pray for her return so she might give birth to a new clutch of neothelids enabling them to resume their cannibalistic hunting.[2] Other neothelids revere the Dark Tapestry entities Azathoth, Yog-Sothoth, and Nyarlathotep as secondary powers to their mother. They are opposed by the elder things, who once fought them in the past and know that if the elder things succeed, Golarion would witness a cataclysm greater than any since Earthfall.[2][4]

The neothelids of Golarion primarily inhabit the Darklands. The majority of them live in the vault of Denebrum in Orv, where their reproduction takes two to three centuries,[4] but they can also be found on islands in the Sightless Sea. Five centuries ago, they started to expand their empire to include the whole of Orv.[2][5]