This page contains spoilers for the following products: The Skinsaw Murders. 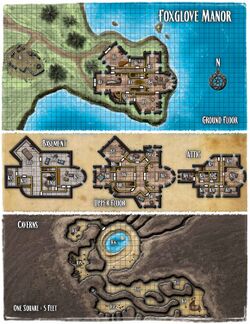 A map of Foxglove Manor

Foxglove Manor is a haunted mansion on the western coast of Varisia (also known as the Lost Coast), approximately halfway between Magnimar and Sandpoint. Constructed in 4624 AR by minor Magnimarian noble Vorel Foxglove, and funded by the Brotherhood of the Seven, Foxglove Manor was intended to be the ancestral home of Foxglove's family for 100 years before reverting to the Brotherhood's ownership. Three generations of Foxgloves have met tragic ends in the Manor, from Vorel and his wife to Aldern Foxglove, who perished in 4707 AR. The manor consists of three stories overlooking a high sea cliff, a basement and natural cave network, and a ruined outbuilding.[1] As of 4710 AR, Foxglove Manor is believed to still be haunted by Vorel's malign spirit and is currently uninhabited.[2] 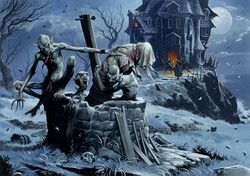 Exterior of Foxglove Manor as viewed from the old well