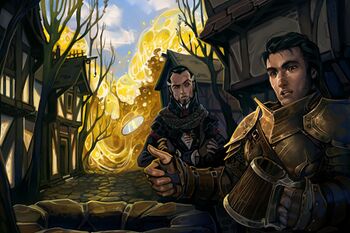 Erasmus looks on while Valeros unwittingly activates a haunt as he wishes for more ale.

Haunts are manifestations of spirits created by anguish, despair, and pain, too weak to form into true undead but strong enough to form trap-like hazards. Though their origins are dire, and many are harmful to the point of lethality, haunts themselves may be neutral or even helpful to those who know how to properly entreat them. While haunts can be destroyed, they will manifest once more after enough time has passed. To put a haunt permanently to rest, one must fulfill a particular contrition and appease the restless spirits.[1]

Some creatures are connected to or similar to haunts.

Below is a list of some of the haunts that can manifest on Golarion. It is by no means an exhaustive list.

Horrific and fear-inducing sensory hallucinations that can take many forms. Shadows shift into monsters, mirrors reflect rotting visages, bile oozes between floorboards, blood drips from walls, dying wails echo through the air, and countless other horrors manifest to the senses of their unfortunate victims. These manifestations are usually the psychic residue of traumatic events rather than a particular spirit and can be put to rest with a hallow spell.[1]

Choking hands may form as manifestations of both serial murderers and their victims, forming ghostly hands that strangle victims and bolster themselves with the dying gasps. They can be put to rest by bringing a set of blessed manacles within the haunt's area, which capture its essence and must be thrown into running water to destroy it for good.[1]

Colds spots manifest from victims of violence who lacked the strength to manifest as true ghosts. Unlike most haunts, which are stationary, they can roam free within their home structure, manifesting as an area of bone-chilling cold capable of killing the ill-prepared. They can typically be put to rest by casting heat metal on an object in the area of manifestation. The object will them absorb the spirits and must be quickly buried on hallowed ground to permanently dismiss the haunt.[1]

The result of gruesome multiple murders, the spirits of the victims manifest as a single nightmarish amalgam that harms those it passes through. They can be put to rest by discovering the name of every spirit that makes up its being and calling them out while it it rejuvenating, causing the spirits to separate and pass on.[1]

Fall of the House of Haunts

When a location is saturated with a great number or power of haunts, it may make a final self-destructive effort to ensure those who have uncovered its secrets take their knowledge to the grave. The weather tears itself into violent storms, foundations shatter, and the entire structure tears itself down in a torrent of screaming rubble, putting a final end to the location's ghastly history. By its very nature there is no need to put such a haunt to rest, as such a tumultuous finale releases the restless spirits within, but a hallow spell can effectively dismiss any lingering spirits.[1]

The crescendoing whispers and ravings of spirits driven to madness that elicit a sympathetic affliction in those who hear them. They can typically be put to rest with a holy smite.[1]

Spiteful suicides, gjengangers manifest as cruel and twisted duplicates of the intruders they confront. They do little to kill intruders outright, but their touch leaves blue and sunken marks, a trait known either as "dead man's pinch" or dødningeknip. This touch quickly grows into a virulent illness that kills the afflicted individual. A gjenganger can be indefinitely prevented from rejuvenating by painting a holy symbol in tar in its territory, but permanently dismissing them is another matter. To put them to rest, their remains must be located, exhumed, carried around a church of a good deity three times, and passed over a churchyard wall for reburial.[1]

Spectral cavaliers who met their ends by decapitation, headless horsemen viciously guard the sites of their deaths. They can be put to rest by burying a holy weapon in the roadway they guard and provoking the horseman into charging over it on a full moon.[1]

A form of haunt associated with Barzillai Thrune's undead remnants. Spectral hounds arise and pursue a creature not openly bearing the symbol of Asmodeus, visible only to their quarry as they tear it to pieces. An exorcism can permanently dismiss the hounds.[2]

Enigmatic spirits that appear to wounded visitants offering a chalice. To some, their chalice holds a healing elixir, while to others it holds deadly poison. If a mad monk means to help, they can be put to rest if a good creature truly in need of aid turns down their offering. If they mean to harm, the ringing of a church bell will permanently put them to rest.[1]

Lazily floating clouds of glowing lights that inspire supernatural fear in those who witness them. Orbs cannot truly be put to rest, as they are too diminished to hold onto a sense of identity to be appeased or offended. Instead, they are permanently lessened in strength each time they are forced to rejuvenate until they dissipate entirely.[1]

A form of haunt associated with Barzillai Thrune's undead remnants. Thunderous peals of diabolical bells fill the area, harming and even slaying the living. Meaningful recitations against the power of Hell worked into an opposing musical performance can dispel the haunt.[2]

Some of the weakest and most common haunts, rapping spirits manifest as a chorus of knocking and bumping that comes from and within walls, floors, ceilings, and other surfaces that instills a disproportionally intense fear in those who hear it. Other haunts that are temporarily destroyed may manifest as rapping spirits while they rejuvenate. With effort, a system of communication may be established with the knockers to gather information from the spirits. They can typically be put to rest by properly interring their mortal remains.[1]

Women who carry spite concerning their lost youth all the way to the grave may manifest as spirits that siphon the trait for which they lust from the living. They can be easily put to rest by simply presenting a mirror so that they may behold their own true appearance and witness the eternal futility of their efforts.[1]

Typically manifesting as a protest against intrusion, slamming portals are spirits that close or lock doors, windows, and other methods of entry. While this can happen to bar further passage, they may also serve to bar retreat from deadlier hazards. They can typically be put to rest by sprinkling holy water on the area of the spirits' influence.[1]

Ghostly carriages manned by cackling ghosts, spectral carriages replay their final, fatal accidents over and over, though they will eagerly take the chance to drag others with them down the road to death. To destroy these powerful and chaotic haunts, a living mare must be brought to the haunt and sent to the Ethereal Plane, where the carriage's horses will give chase and become lost forever.[1]