Barzillai is a distant cousin of Queen Abrogail Thrune II of Cheliax.[3] When he was a boy, his mother beat him countless times for both real and imagined failings.[4] He had an unhealthy obsession with his sister Narcelia, especially after she left home and abandoned him to their abusive mother, eventually developing into a fear of intimacy and women. Due to some unknown magic she used, Barzillai never managed to track her down, only knowing that she was still alive somewhere on Golarion.[5] 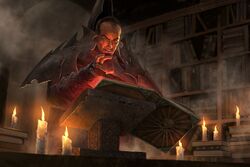 Barzillai Thrune at his research.

Barzillai Thrune began his career as a loyal servant of the church of Asmodeus and the nation of Cheliax but, over time, grew dissatisfied with what he perceived as weakness in both organizations. He originally planned to take control of the church and nation to steer Cheliax towards his vision of greatness, but eventually found that he needed to abandon his ties with his family (who regard him as a black sheep), and the resources and power that would come with that, if he were to climb further in the church. Barzillai then moved to a more ambitious plan: to transform himself into a genius loci and thus become Cheliax itself. With such a transformation, Barzillai would become the eternal master of all of Cheliax's inhabitants, including its rulers. This plan went mostly unnoticed; those who did eventually became Barzillai's servants or got silenced by him.[3][6]

Barzillai made the greatest breakthrough in his research when infiltrating the Sacred Order of Archivists, an order of Iroran scholars dedicated to protecting and restoring history. When perusing a portion of the Book of the Damned, Barzillai learnt how the archdevil Mephistopheles was raised by Asmodeus from the quintessence of Caina, eighth circle of Hell.[3]

Barzillai approached Mephistopheles and asked him if the process that created him could be reversed. Mephistopheles was intrigued by the question, and for the next several years, in exchange for an answer, Barzillai provided Mephistopheles with secret sacrifices, adjustments to contracts involving him, and appropriations of church and state resources to further Mephistopheles' plans, before the archdevil confirmed that a ritual did exist that could allow Barzillai to undertake the transformation he wanted.[3]

Barzillai would need to seek out a location where the River of Souls had been damaged, bind his soul to it, and magically remove his own heart. One such possible location was a hidden temple to Mahathallah deep under Kintargo and the location of a soul anchor, which allowed the nearby dead to keep their memories in the afterlife: the exact type of damage that Barzillai needed. If his heart were kept within the soul anchor until Barzillai died of old age, he would become a genius loci following his death. However, the contract through which the archdevil released this information also stipulated that, if Barzillai were to die of causes other than old age, his soul would enter Mephistopheles' possession for torment in Hell for the rest of what would have been Barzillai's natural lifespan; after that period, he would return to the Material Plane as a genius loci.[3][6][7] During this time, he also discovered the Kintargo Contract and the loophole installed there by his ancestor Abrogail I, which he saw as a way to prevent his family or the church of Asmodeus from interfering in his plans.[8]

In order to get close to the soul anchor, during the chaos of the Glorious Reclamation, Barzillai volunteered to take charge of enforcing martial law in Kintargo. Queen Abrogail quickly accepted and promoted Barzillai to the status of paracount, glad to send her creepy cousin away from Egorian into a place where no Thrune would want to be.[3][6]

As soon as he arrived in Kintargo, Barzillai paid the local Kuthite temple to abduct the incumbent lord-mayor, Jilia Bainilus, and transform her into a vampire against her will, while spreading lies that she had abandoned Kintargo on a ship bound to Arcadia. Three days later, Barzillai and his agents struck against all known or suspected dissidents, driving them off or killing them. He also enacted seven unjust and darkly whimsical new laws with which all of Kintargo's citizens would have to abide.[3]

Unknown to Barzillai, Mephistopheles had hoped all along that the his actions would result in an early death so he could have the opportunity to study his soul. Indeed, Barzillai's tyranny pushed the citizens of Kintargo to resurrect the old Silver Ravens and depose him. Due to his contract and influence of the soul anchor, Barzillai's soul fell into Mephistopheles' hands and transformed into an osyluth with his memories intact. Despite this newly infused power, he could do nothing but languish in chains at the top of the Tower of Bone and suffer the torments of other devils. As long as Ravounel remained under Chelish rule, Mephistopheles could observe Barzillai's soul resisting transformation into quintessence and the urge to return to the Material Plane.[9][10][11]

Soon enough, the Silver Ravens secured Ravounel's independence from Cheliax, in the process unknowingly freeing Barzillai from his humiliation and allowing him to begin the long, painful transformation into a genius loci.[9] In order to stop this transformation and prevent Barzillai from turning Ravounel into a Hell on Golarion, the Silver Ravens descended into Caina to kill him for a second time.[12]

However, despite the failure of his plan, undead remnants of Barzillai have remained throughout Ravounel.[13]