The Ethereal Plane is a transitive plane that borders the Material, Shadow, and Elemental planes, as well as the First World.[1][2][3][4] It also hosts emotional forces relevant to psychic magic.[3]

As it intrudes into all of its neighbors, the Astral Plane can be used for travel between them. On the plane's borders, a traveler can peer into the neighboring reality, although the view is obscured as if looking through a cloudy pane of glass.[1][2][3]

This plane has very little of what most natives of Golarion would call geography. It is a place of ever-shifting mists with little hard matter to obstruct the traveler. Near its borders, one can peer into the neighboring planes and easily move back and forth, provided one has that ability. Travelers from these other planes often momentarily step into the Ethereal Plane via magic to bypass dangers or solid matter.[1][5] There are also places within the Ethereal Plane where the borders between the planes grow thin due to natural variation or the effects of magic.[2]

There is no gravity in the Ethereal Plane. Time passes at the same perceived rate as on the Material Plane, and the permanence of matter (what relatively little exists in the In-Between) is the same on the Ethereal and Material planes.[4]

Long ago, the goddess Desna is said to have accidentally freed the god Ghlaunder from his cocoon that was floating in the Ethereal.[6] 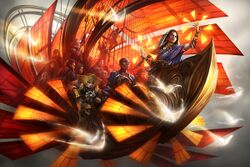 Shardra Geltl, Sajan Gadadvara, and Rivani sail on a strange ship in a dream voyage through the Dimension of Dreams.

When mortals of the Material Plane dream, their consciousnesses drift into the Ethereal, warping its reality within a place called the Dimension of Dreams. Imagined places and people are created in tangible forms out of the misty substance of the plane. Because of this, the fabrications of nightmares can be a threat to travelers on the Ethereal Plane, as these places and creatures act in a manner consistent with the dreamer's worst fears.[7] The indigenous night hags prey on dreamers, collecting these dreams and haunting the dreamers until they have captured their souls.[8]

Special magic can pierce the veil of churning dreamscapes and access the Dimension of Dreams itself.[9]

The Ethereal Plane is home to phantasmal creatures such as ghosts, as well as things born from the dreams of mortals. It is also the home of night hags and the xill.[1][7]

There are rumors and legends that there are additional portals within the Ethereal Plane connecting it to a variety of places, including other worlds within the Material or Shadow planes and places within the Outer Sphere.[1] Other myths tell of a pocket plane created by the gods in which they deposited their beloved mistakes of creation.[2]