Psychic body snatchers to whom no experience is too extreme and no flesh is sacred, intellect devourers are one of the strangest, most mysterious races of the Darklands.[1] Using their ability to compress their body, intellect devourers crawl through the mouths of helpless or dead creatures, consume the brain, and assume control of the new host body.[2]

Intellect devourers appear like large humanoid brains that have sprouted hideous reptilian legs from the depths of their soft bodies. Strangely, despite appearing like soft and squidgy brain matter, their outer shells are incredible resilient to damage and far tougher than they look. Of course, intellect devourers are rarely seen in this form; they are most frequently encountered possessing a host's body.[1]

The intellect devourers on Golarion initially arrived when their spaceship was critically damaged by an enemy ship: the same ship that they had been ordered to prevent from reaching Golarion. The intellect devourers escaped in a pod meant for bigger species, which crashed into the Darklands. They quickly came into conflict with the alghollthus, gugs, neothelids, and other aberrations. These intellect devourers eventually came to treat Golarion as their homeworld and develop an attachment to their humanoid hosts, considering themselves distinct from their kin who remained with the Dominion.[3] 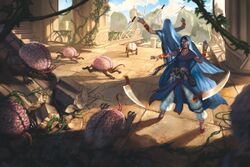 Intellect devourers close in on a skilled psychic.

The key feature of the intellect devourers is their natural inability to feel or experience anything in their natural form, neither physical sensations nor emotions. This leaves them desperate for sensory input, and the only way of achieving it is to possess a host body. Unfortunately, these usurped bodies rarely last long, as the intellect devourers are decadent hedonists and find pain as intoxicating a sensation as pleasure. As such, they always thirst for new bodies to inhabit.[1]

Intellect devourers' primary foes are the neothelids of Orv, who lack brains and, therefore, cannot be controlled; the neothelids' seugathi servants are similarly uncontrollable. They have found some success in controlling purple worms, but have been unable to gain the upper hand.[3]

Many intellect devourers still reside on their original homeworld, spawning more generations to serve the Dominion of the Black. They have been spotted on Aucturn and the dark corners of other worlds in Golarion's solar system. They maintain a laboratory in the Diaspora to experiment on akatas and hope to weaponise them for the Dominion, but the akatas have proven themselves difficult test subjects.[3][5]