Purple worms are massive, alien worm-like creatures,[1] and are considered the most common and well-known species of cave worm.[2]

These creatures are gigantic—a typical adult is 80 feet in length and five feet in diameter, and weighs 40,000 pounds. They are covered in segmented purple armour and have a mouth of sharp teeth capable of burrowing through rock.[1]

The origin of purple worms lies outside of Golarion, in the Dark Tapestry. They hibernated inside meteors—possibly created by the same planetary destruction which created the Diaspora—which fell to earth in Golarion's early days. Some survived the landing and found the world very suitable, enabling them to grow large and multiply.[3]

Some sages believe they may be distantly related to the neothelids.[4]

Like other types of cave worms, purple worms eat almost any organic material they find, and are also able to gain sustenance from the minerals in the rocks they burrow through.[2] They are always hungry and active, apart from on those rare occasions when they hibernate (often for several years at a time).

Purple worms never stop growing during their 800-year natural lifespans. They are hermaphrodites, though two are needed to reproduce. After mating, both worms lay a clutch of dozens of eggs, which they abandon in a walled-off chamber. Of those eggs, only 10 to 20 worms typically hatch. These hatchlings are up to five feet long and feed on one another until only one or two are left. After about a week, any survivors develop the ability to burrow through stone and can escape the egg chamber. They reach full size in only a couple of years.[3]

Purple worms are solitary creatures, apart from when two come together for mating. They prefer to live underground but may sometimes spend short periods on the surface—for instance, to attack prey they have detected walking above them. They avoid sunlight, although it does not appear to harm them.[3]

They carry no treasure, but their gullets might contain swallowed items capable of resisting their digestive acid. Their digestive tracts also occasionally contain naturally forming ovoids known as worm pearls, which are valued by some cultures. As a side effect of their burrowing, they may leave behind deposits of unrefined ores.[5]

The neothelids and intellect devourers both enslave purple worms,[4] and the undead of House Shraen also have some means of magically controlling them.[6] It is believed that the cyclopes of the ancient Ghol-Gan civilisation used captured purple worms to help excavate the colossal March of Madness which winds its way through the region of the Darklands known as the Reguare or Sleepless Realm.[7]

Purple worms can detect vibrations up to 100 feet away, allowing them to locate prey. They have large and powerful teeth, but the true threat for smaller creatures is the chance of being swallowed alive. A purple worm's tail ends in a venomous stinger.

They are relatively slow, moving about as fast as a dwarf, but can burrow through solid rock at the same rate. They are also surprisingly accomplished swimmers.[2] 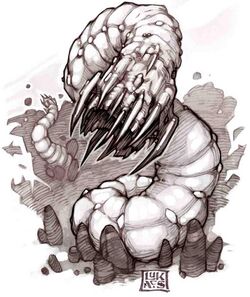 There are a number of other known types of purple worm.

When a purple worm is exposed to powerful magic (for instance, by swallowing a mighty magic item or spell-casting creature), the experience warps and strengthens them into great worms. Such worms often have extended lifespans, living up to 1,500 years, and may have other strange abilities as well—for instance, being surrounded by an aura of energy that discharges when the creature is struck and lingers in the tunnels it creates. Others may resist types of energy, heal extremely quickly, or become resistant to spells.[8]

There is a brown and grey, aquatic version of the purple worm known as a mottled worm. It can be found in both fresh and salt water, using internal gill-like organ to breathe, and can also survive out of the water for several hours (although this makes them uncomfortable, so they rarely stay out of the water for more than an hour).[9]

The rare toothed worm is a variant of a purple worm lacking a stinger, instead having a set of sharp "teeth" around its mouth. This maw provides a vicious bite and aids in burrowing though rock. The purple colour of its famous cousin is replaced by an albino skin.[10]

Purple worms largely inhabit the Darklands, and are increasingly common as one travels deeper underground. They are particularly common in the Black Desert of Orv, which is one of their major spawning grounds.[6] Toothed worms roam the rocks beneath the Mwangi Expanse.[10]

A mile-wide valley in the depths of the central desert of Casmaron is said to have been the crater of the first purple worm landing on Golarion. The local tribes whisper that the progenitor of the purple worm race, a mighty monster they call the Star-Worm, still slumbers here and will one day awaken and consume the world.

Crawling Hunger, one of the servants of Rovagug in the Pit of Gormuz, is described as a clawed purple worm which has achieved something approaching sentience.[11]