Velstracs, called kytons by those outside of their society,[1][2] are cruel, amoral fiends from the Shadow Plane obsessed with sadomasochism and self-perfection. They thrive on the fear and pain of mortals, which they inflict with both supernatural dread and physical torture.[3] 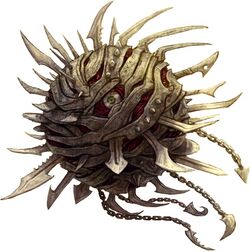 These creatures call themselves velstracs. Some mortals refer to them as kytons, a misuse of a word velstracs use to denote a master or virtuoso[3] that spread when the velstrac demagogue Kaikyton wandered the Material Plane, and her onomatopoeic name became associated with her followers by early mortals. Velstracs find kyton flattering, and most do not bother to correct mortals when this word is used,[3] except for phylacators.[4][5]

The first velstracs coalesced from the selfish and depraved thoughts of the earliest mortals. These creatures were so hideous that the gods themselves chained them in the pit of Hell. These velstracs escaped their prison, however, for the Shadow Plane.[3]

When Asmodeus led his army of exiles from Heaven to Hell, the velstrac demagogues, asura ranas, and gigas warlords gathered in council, intent on uniting their armies against the devils, only to be betrayed by one of their own: the asura rana Geryon, who devoured 812 tyrants of Hell. The elder velstrac demagogue Aroggus led the velstracs in their exile from Hell to the Shadow Plane, which they adopted as their new home. Since then, many velstracs have came back to Hell, and they continue to maintain a presence there.[6][7]

The souls of sadistic or masochistic mortals become velstracs when diverted from the River of Souls into the Shadow Plane and crafted by other velstracs into new kin.[3]

Tieflings who are descendants of such pairings are known as velstrac-spawn, or shackleborn.[8]

Velstracs consider themselves above good and evil. They engage in their search for the perfect sensation with the passion of scientist-artistes, and consider no cost too high for the secrets of the ultimate being.[4]

Velstracs inhabit the Shadow Plane, whence they fled after escaping Hell.[9] The nine velstrac demagogues are the demigod rulers of the velstrac race; each one is the master of a vast domain on the Shadow Plane, ruling from cities built from still-living flesh.[10] Many velstracs work for Zon-Kuthon, god of darkness, pain, and suffering, and live in his domain Xovaikain.[11][9]

Unlike many lawful outsiders, velstracs have no monolithic hierarchy; the most regimented velstracs are usually Zon-Kuthon's servants. Many independent velstrac cabals function like workshops of artists or artisans. They prefer to focus on personal endeavours and rarely gather in huge numbers for conquest. Many velstracs seek to follow the paths of those known to have had some brush with the sublime.[4]

Despite their history of imprisonment in Hell and conflict with the exiles from Heaven, velstracs have established an embassy in Dis, the Broken Chains, and are an important ally of the devils.[9][12] Many velstracs have settled back in Hell, where they flourish.[13] Some have become mercenaries and serve powerful devils, such as Mammon.[14]

Owing to their association with the Midnight Lord, the faithful of Zon-Kuthon regard velstracs as sacred to their religion.[15]

Velstracs are rumored to be employed as torturers by the cult of the Living God in Razmiran, and their lusts may have given rise to a small colony of velstrac-spawn.[8]

Paizo referred to velstracs as "kytons" in Pathfinder First Edition.[2]